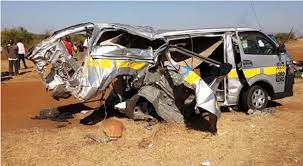 Four people died while eight others were injured following an accident in the Maltauro area on the Narok-Mai Mahiu highway, Narok County, on Sunday, November 14, 2021.

Police said the four included a woman and three men and the accident involved a private car that had originated Kisii and was headed towards Mai Mahiu and a Crested Galaxy matatu travelling from Nairobi to Narok direction.

Police and witnesses said the two vehicles collided at the scene killing the four while the injured were taken to the hospital.

Narok East Police boss Jared Marandu said preliminary findings had shown the driver of the private van was trying to avoid hitting a pedestrian who was crossing the road and accidentally collided head-on with the Crested Galaxy matatu.

Marandu however said the accident is under investigation.