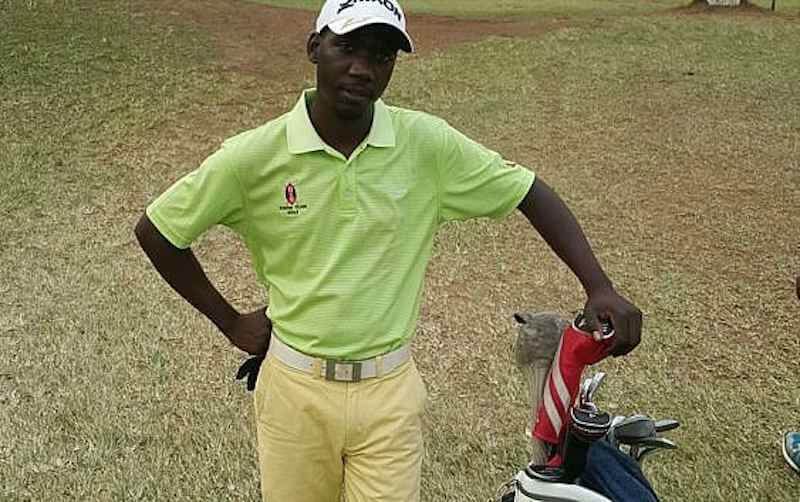 Zimbabwe’s Visitor Mapwanya shot a perfect eight under par 64 in day two of the Safari Tour seventh leg, to jump to the top of the leader board where he joined Thika Sports Club’s c, as the surviving 20 players tackle the third round of the Kenya Commercial Bank (KCB) sponsored tournament at the par 72 Karen Country Club Course.

During Monday’s second round Mapwanya, who collected 10 pars and eight birdies, four in each half in the bogey-free round, said he was encouraged by the great condition of the course which offered players a great chance of low scoring compared to the way the Limuru Course was playing a week ago.

“I really enjoyed playing on this course though I must say my game was well balanced today where I made 23 putts. Putting and approach shots were however my strength’’ said Mapwanya and added: “I think I am in a position to win at least one event this season with the way my game is added’’.

He birdied the first and second and the eighth and ninth, while at the back nine the Zimbabwean made birdies at the 11th and 12thand the 15th and 18th. Meanwhile the round one leader Simon Ngige dropped a shot at the 17th but he had made four birdies at the opening nine in addition to the three birdies at the back nine’s 13th, 14th and 15th for a second successive 66, to also close the day on 12 under par.

“I am happy I was able to keep my cool again today, and managed to again play six under par. My game plan has been to take off well from the tee and make it to the green on regulation because that gives me a good chance to score. The course is playing well and obviously giving us a good chance to score’’ said Ngige who is chasing his maiden victory in the Safari Tour.

Staying very closely with the two leaders was another Zimbabwean Robson Chinhoi who shot five under par 67 for a total of eight par 136 and still with a chance to attack for the top position In the remaining two rounds of the Sh2 million event. “I had a solid round despite the eighth , ninth and 16th holes where I drop shots. I over charged while I had a bad tee shot at the 16th but I still feel I have a chance of winning this one. I have that confidence which is good as we approach the Kenya Open’’ said Chinhoi.

Three other players were tied on six under par 138 after the close of the second round where the cut was decided on level par aggregate. They included Nigeria’s Sunday Olapade, Dismas Indiza and Zambia’s Sydney Wemba.