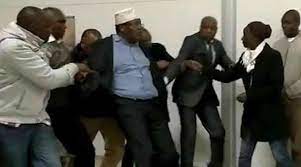 The journey of Kenyan exiled lawyer the self styled General  Miguna Miguna to Nairobi hit a dead end after the government issued a red alert in respect of him to Air France.

The red alert means airlines won’t have him aboard their aircraft.

In a tweet on Monday, Miguna said he was informed about the new development at the Berlin Brandenburg Airport in Germany.

“This is to inform Kenyans and the world that Air France officials at the check-in counter at the Berlin Brandenburg Airport have just informed me that the Government of Kenya sent them a ‘red alert’ this morning that they cannot fly me to Nairobi. I’m waiting for a cop,” he tweeted.

Miguna had booked an air ticket to travel from Canada via Germany and France to land in Kenya tomorrow, November 16, 2021.

He said his flight was scheduled to land at the Jomo Kenyatta International Airport (JKIA) on Tuesday at 9am.

The new development comes after the High Court on Friday declined to lift the red alerts issued by the government against Miguna to travel to the country.

Judge Hedwig Ong’undi said there was no evidence showing that Miguna had been stopped from returning to the country.