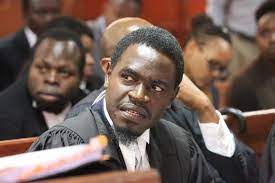 Havi Kicked Out as Law Society of Kenya President

Nelson Havi has been kicked out as Law Society of Kenya (LSK) for failing to convene Annual General Meeting (AGM) as per the court order.

This was after failure by Havi to comply by an order issued  by High Court judge Justice Antony Mrima on December 20, 2021,  for LSK to convene the AGM within 21 days.

“In our meeting today, we received confirmation from the LSK Secretariat that the council has been unable to convene a meeting in compliance with the directions given by the court.

“In default thereof and pursuant to the said decision, the Branch Chairs Caucus has with effect from January 11, 2022, taken charge of the role of the council for the remainder of the term,” the caucus said in a statement.

According to the new developments, the new president of the society is Linda Kiome who is also the chair of the caucus in the Mount Kenya region.

Linda and her team will run the activities of the council for the remainder of the term until new officials are elected.

Branch Chair Caucus added: “The caucus took into consideration the decision by Justice Mrima that once the caucus takes over the role of the Council, none of the current members of the Council including the Secretary shall in any manner whatsoever deal with any of the affairs of LSK in their respective capacities.”

However, the caucus during the meeting resolved to hold a sitting at the LSK Secretariat offices on Thursday, January 13, 2021, to discuss the management of the society with a view of ensuring a smooth running of the secretariat and delivery of services to members.