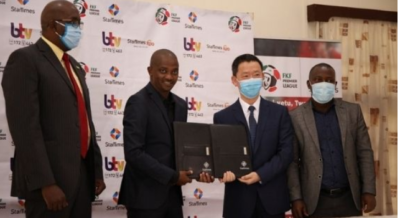 FKF was blamed for bringing the StarTimes brand into disrepute with the firm noting that failure to deliver scheduled matches had sparked consumer backlash.

The move to terminate the deal came after the federation had poorly executed their part of the agreement. The agreement is merely a year old.

The Pay-TV said in their statement that being a subscription broadcaster who leverages on content popularity, the constant confrontation has led to limited uptake and viewership of the property as seen through monitored performance on its platform.

The other part of the press statement from the Chinese broadcaster read that:

“after a careful review of the contract performance which is now in its second season, we regret to announce that we have taken the painful decision to withdraw our media and commercial rights sponsorship with the now disbanded Football Kenya Federation.”

“The execution of the said agreement has been wanting, occasioned by different acts of commission or omission including but not limited to the following:

Failure to deliver a number of scheduled broadcast fixtures: Despite prior confirmations, several fixtures including one Mashemeji derby in the 2020/21 season were not delivered.

Frequent changes to confirmed fixtures: We have had to work with an unstable fixture that has constantly changed, at times on short notice. This has led to lack of cohesion and promotion of wrong fixtures which ultimately translated to limited awareness of broadcasted matches.

Persistent stakeholder wrangling within the football fraternity: The persistent acrimony between the governing body and its key stakeholders among them media and top tier clubs has negatively affected the league’s brand affinity. Being a subscription broadcaster who leverages on content popularity, the constant confrontation has led to limited uptake and viewership of the property as seen through monitored performance on our platform.

Failure to honor agreed contract deliverables: This is seen in various forms including but not limited to failure to broadcast the weekly free to air (FTA) fixtures,

providing the weekly magazine shows and acknowledging the media sponsor as the official broadcast partner across agreed platforms.

Constantly putting the StarTimes brand into disrepute: The failure and/or delayed delivery of scheduled fixtures have exposed the brand to constant subscriber backlash.

These among others have combined to make it almost impossible to have a return on investment through the sponsorship of the said property.”

It is to be noted that this comes in after the president of FKF has finally been set free from all allegations against him.