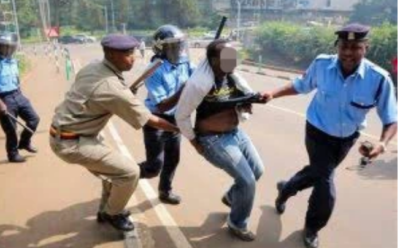 The bribe was supposed to keep Kinyua from being taken to court over an ongoing case.

He is being accused of attempting to defraud his uncle, James Muriuki, of a piece of land located in Mathira West.

The report reveals that the suspect walked into the station at around 3 pm on Wednesday 1st December and asked to speak to officer Mulunga on camera.

It has been revealed that the officers waited patiently for the other cops to leave before approaching the said cop.

The area police boss after being contacted on the same incident ordered the two be detained as futher investigations are conducted.

This incident has sparked uproar across the internet with a majority of netizens questioning how the anti corruption officers were willing to bribe their way out of trouble.

President Uhuru kenyatta has been insisting on preventing this corrupt officer from entering offices.

Corruption in kenya is just a thorn in the flesh with so many institutions involved in the scary vice.