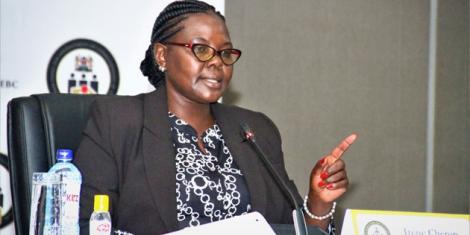 Donald Kipkorir, who is Masit’s lawyer, said the reports that she has resigned “are the work of political brokers and idlers”.

Reports surfaced online on Thursday, December 8, 2022 afternoon making the claims about Masit, who is the only commissioner yet to resign out of the four senior IEBC officials set to be investigated by a tribunal.

“IEBC Commissioner Irene Masit has given me firm instructions to quash her unconstitutional impeachment proceedings by Writ of Certiorari.

“We have already filed a Constitutional Petition in High Court, Nairobi. Any reports that she has resigned are the work of political brokers & idlers,” Kipkorir wrote on her Facebook page.

There have been a series of resignations involving embattled four IEBC commissioners who disowned the August 9 presidential election results.

Wanderi and three other commissioners, Juliana Cherera, Justus Nyang’aya and Irene Masit, have been accused of attempting to change the will of Kenyans after opposing IEBC chairperson Wafula Chebukati’s declaration of William Ruto as the winner of the August 9, 2022 presidential election.

Last week, Ainabkoi MP and chairperson of the Committee on Delegated Legislation Samuel Chepkong’a warned that should all four commissioners resign, the tribunal would have no business to transact.

“The tribunal was inquiring into the misconduct of the four commissioners and if all of them resign the work of the tribunal ends there, but if even one of them remains in office then the commission must continue with its work as each of them bear personal responsibility,” he said.

Gatanga MP and Justice and Legal Affairs committee member Wakili David Muriu also echoed Chepkonga’s sentiments saying the work of the tribunal will be over should all the commissioners resign as it was set up under article 251 of the constitution.