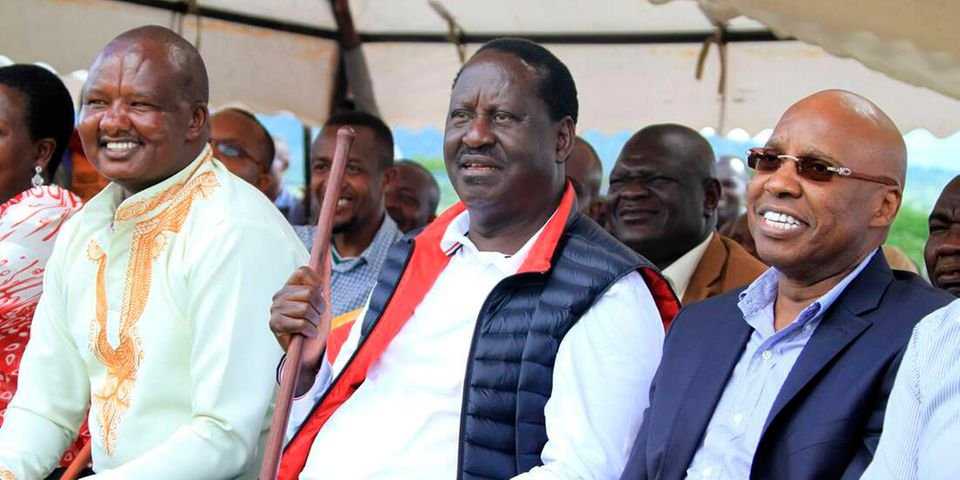 I hid Raila at my home for seven days after mock swearing-in ceremony: Jimi Wanjigi

Businessman Jimi Wanjigi has disclosed how he hid ODM leader Raila Odinga at his home for a week after the mock swearing-in ceremony on January 30, 2018 as the ‘People’s President’, fearing that the State could arrest or visit harm on him.

Mr Wanjigi, who was in Mr Odinga’s innermost circle during the 2017 elections and had been instrumental in negotiating the Nasa coalition deal, also says that Mr Odinga had pre-recorded a swearing-in video out of fear that he would be blocked from the Uhuru Park rally, or would be arrested before the date.

Like the Uhuru Park rally, the other Nasa principals did not turn up for the pre-recorded swearing-in at Mr Odinga’s home in Karen.

“It was a great historical period. This was one of those situations where we push democracy beyond boundaries never envisaged. Now in hindsight people think it was no big deal but at the time, I can tell you that the number of people who called it treasonous and predicted the very worst Kenya were many. They include the political actors we were with to a lot of the foreign missions in Nairobi as well as our friends,” Mr Wanjigi said in an interview.

The swearing-in of Mr Odinga was held on Tuesday January 30, 2018, at Uhuru Park after being postponed about three times as pressure mounted on the former Prime Minister to drop the idea. The other Nasa principals, Kalonzo Musyoka, Musalia Mudavadi and Moses Wetang’ula did not attend the event after some convoluted explanations. They said the reason for their absence was that the swearing-in was illegal.

The then Attorney-General Githu Muigai had also threatened that Mr Odinga would be arrested for treason while some of Nasa officials were rounded up after the event and arraigned in court. It also marked the beginning of lawyer Miguna Miguna’s troubles that led to his removal from the country.

Early that Friday, the Nasa team held a press conference at Intercontinental Hotel to publish the figures which showed that they had won the August 8, 2017 elections. They had agreed that after that function they would have a swearing-in video taken at Mr Odinga’s home with all the principals and the close advisors of Mr Odinga present.

“The idea of pre-recording the video was out of fear that we may not get to the park on January 30. We could be arrested and the event scuttled. We had three approaches: one was to have the video. The second was a plan on January 30 to have secret venue if we could not get to Uhuru Park. The third option was the Uhuru Park rally,” said Mr Wanjigi.

At Mr Odinga’s home, staff had set up a room with flags, nice crown and emblem. The Bible was ready and lawyer Miguna Miguna was there to administer the oath, Mr Wanjigi says.

“So we headed there but the other principals did not show up. In fact they were completely unavailable. We waited until 5.30pm but they did not come,” said Mr Wanjigi. However, at a rally in Homa Bay the following day, one of the People’s Assembly meetings, the coalition had called, the other principals all turned up.

Having suffered the disappointment of the other Nasa principals not turning up for the pre-recording of the swearing-in event, Mr Odinga and his aides organized another event on Sunday after the Homa Bay rally. This time they did not reach out to the principals.

Instead, Mr Wanjigi says they invited Nairobi MPs who had been elected on ODM and the party nominees to Mr Odinga’s home. They were asked to be there by 8am on Sunday. “So we did the meeting with the Nairobi MPs and also the swearing-in without the other principals. It was marvellous. We even had champagne after that and we were enthused for the Tuesday rally at Uhuru Park,” he recalls.

With the pre-recorded video safely in place, Mr Odinga and his aides were relaxed well aware that one way or the other, their supporters will have something to cheer. On the eve of the swearing-in, Mr Wanjigi says he took Mr Odinga to a secret location within Nairobi where the ODM leader spent the night.

The other principals wanted to have a meeting with Mr Odinga at Mr Wetang’ula’s home in Nairobi but according to Mr Wanjigi, they could not agree to Mr Odinga moving around. It was agreed that they could meet at a venue close to where Mr Odinga was but again, Mr Wanjigi says they did not turn up.

On the swearing-in day, Mr Wanjigi says he drove Mr Odinga to Uhuru Park in his armoured vehicle. After the swearing in, he says Mr Odinga again drove in his car to his home in Karen for a brief stay. He then left for Mr Wanjigi’s home for the next seven days.

“I think we accepted that anything could happen to him because he had taken the oath and there had been all manner of threats. I brought him to my home because I was of the opinion that Uhuru would never come to my home again. That was the safest place. I kept Mzee safe for one week in my home,” said Mr Wanjigi.

A week after Mr Odinga left his home, there was an attempt to arrest him along the road. He recalls he had just had lunch with Mr Odinga at Dusit Hotel in Riverside.

Mr Wanjigi has declared his interest in the ODM ticket to run as president in the 2022 elections. He says he is going all the way