Ignorance lands DCI George Kinoti in trouble, he is expected to serve a sentence in prison 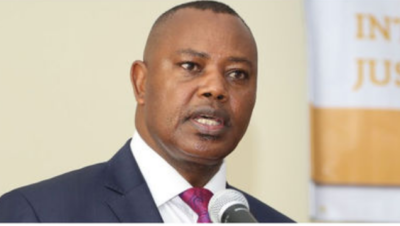 Director of criminal investigation Mr. George Kinoti is now in trouble for failure of returning confiscated firearms from Jimmy Wanjigi.

Thursday 18th November 2021, the high court judge Anthony Mrima sentenced DCI boss to 4 months in prison. Mr.Kinoti has been told to surrender within 7 days to the Kamiti maximum prison where he is to serve his sentence.

Judge Anthony’s rule claimed that the DCI failed to honor all court summons sent to him on Monday, September 27th 2021. He was left with no choice but to sentence him as he was guilty of contempt of court.

Kinoti was directed by Mrima to appear at the High court on 18th November 2021 for sentencing.

Seven guns were confiscated from Wanjigi’s home. In 2019 the High court ordered the state to return the business man’s firearms which were never returned.

In February 2021, the court ordered for the DCI to ensure he got his guns but the orders were ignored.

This is after Justice Chacha Mwita ruled that the government acted unreasonably by taking away Wanjigi’s firearms since he had a valid license.

Wanjigi had told the court that the police had raided his house without a search warrant and took his firearms. He also said there was no proof of misuse of the guns nor had he been charged of crime in any Court.