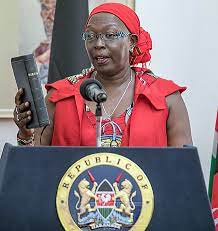 During the tournament, the Laibons posted a total of 680 points scored by the best 20 players, while the Old Cambrians returned a score of 636 points.

In other scores, taking the individual title on the Laibon’s side was Simon Mwatha who scored 44 points, two more ahead of his closest challenger Geoffrey Warukira who scored 42 points.

The best gross winner of the day was Robert Nyanchoga who carded a round of 72 gross points.

In the Nines, Raphael Lekolool and Njenga Kimani were the champions in the first and second nine having scored 24 and 23 points respectively.

The prize for the seniors went to Wachira Mahihu while Martha Mbote and Evans Vitisia claimed the accolades in the nearest to the pin challenge in the Ladies and Men’s categories.

Claiming the longest drive titles were Paul Ichangi and Mary Chebukati in the Men and Ladies Categories respectively.

This year’s event which was sponsored by Kenya Breweries Limited through the Johnnie Walker brand aimed to raise funds to cater to bright but needy students at the two schools. Over Ksh 1 million was raised towards the initiative.

Speaking during the Prize-giving ceremony, EABL’s Head of Marketing, Spirits Josephine Katambo said; “Today’s event is a celebration of golfing prowess which we have seen improve over the last nine years. As Kenya Breweries Limited, we are big fans of sports and believe that sports play a big role in promoting unity, healthy living, networking as well as supporting our local communities. We are also pleased that the proceeds of this event will go towards the Laibon Golf Scholarship Fund, which will be used to support bright but needy students which makes our sponsorship worthwhile.”