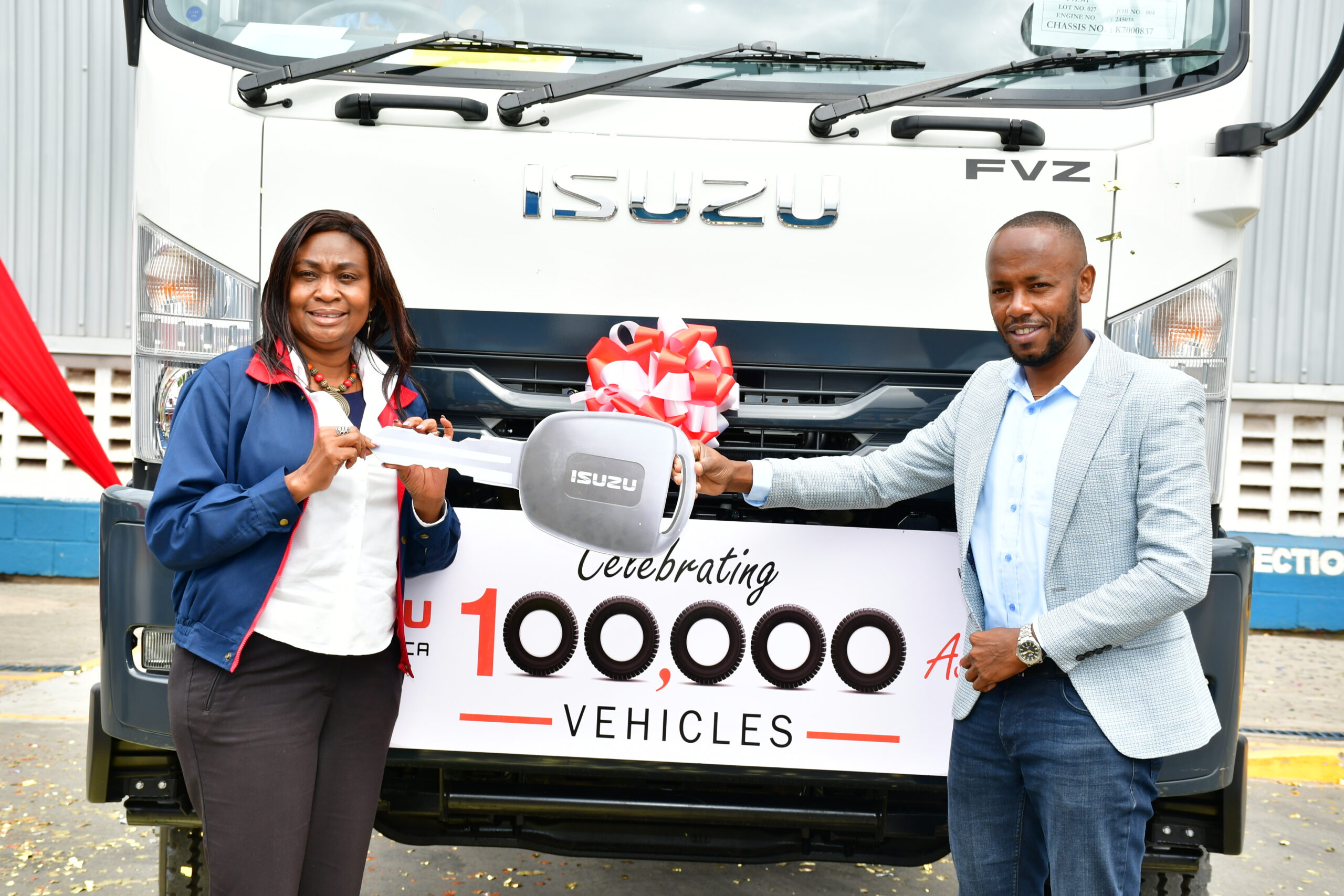 Isuzu East Africa marked the production of its 100,000 vehicles to roll out of its assembly plant since the commencement of operations in 1977.

The largest commercial vehicle assembler in the region celebrated the milestone at a ceremony to unveil the vehicle held at its Nairobi assembly plant on July 19th, 201.

Speaking at the production milestone celebration, Isuzu EA Managing Director Rita Kavashe, explained that assembling the 100,000th vehicle was a demonstration of the huge vote of confidence that customers have in Isuzu products. “Today, we are saying a big thank you to all our loyal customers over the years for helping us to reach this special milestone,” she said. As our way of saying Asante, we shall be announcing a raft of rewards for our customers over the next three months so that we can celebrate this milestone together,” added Rita.

The journey to this achievement began in 1975 when the Kenyan government saw the need to grow the manufacturing sector, to create opportunities for employment for citizens as well as sources of revenue for the government. A joint venture between General Motors and the government led to the construction of an assembly plant on Mombasa Road that commenced production of Isuzu trucks in 1977.

In 2017, the company changed its name to Isuzu East Africa following the acquisition of the General Motors stake by Isuzu Motors Japan.

The Isuzu EA Managing Director thanked customers, dealers, and staff for their contribution to keeping Isuzu’s reputation as a reliable and trusted logistics partner.

“We are greatly honored and very proud of the Isuzu fraternity that has supported the business to date and propelled us to the number one position in the market with 45.4% market share in 2020,” said Rita. Isuzu EA assembles and sells approximately 5,000 units of assorted trucks, buses, pickups, and SUVs annually, supported through an extensive dealer network across East Africa.

The company has experienced a significant bounce back from the Covid-19 economic disruption with increased orders from customers in the agriculture sector, retail, and distribution of fast-moving consumer goods and last mile deliveries of merchandise.

In 2020 Isuzu EA sold 4,340 units driven by strong demand from SME customers and the Government’s Covid-19 economic stimulus package. The automotive sector was among the eight sectors selected for support with Ksh 600 million budgeted to purchase locally assembled vehicles.

“The government is keen on growing local manufacturing which in 2020 contributed only 3.2% to the GDP, compared to accommodation and food which contributed 10.3 %,” he observed.

“I wish to congratulate Isuzu East Africa for achieving this key milestone and for consistently contributing to the growth of local motor vehicle assembly,” Mr Makateto concluded.

The production of the 100,000th vehicle by Isuzu East Africa reinforces the possibility of Kenya as a primary source of locally assembled vehicles for the Eastern African region.

Kenya’s three assembly plants have a combined potential output of 34,000 units per year but instead are producing a paltry 6,000 units, accounting to less than 20% of the production capacity.

The Kenya Motor Industry Association (KMIA) estimates that local assemblers operating at full capacity would create an additional 50,000 jobs and contribute over Ksh 50 billion in taxes every year.