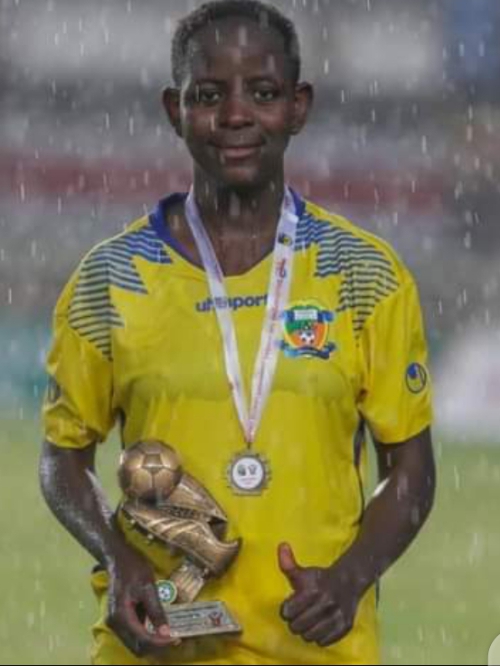 As they say, “Revenge is a sauce best served hot” ,this was the context in the CAF WCL CECAFA qualifiers finals played on Thursday 9/9/2021 at the Moi international sports centre Kasarani as vihiga played host to CBE of Ethiopia.

Having tormented, tortured and eventually beaten the home girls by a 4-2 score line the Ethiopian beauties started this final as the strong favorites.

once beaten twice shy, vihiga queens,united in defeat seemed to have gone back to the drawing board after their group match opener loss and corrected their costly errors. And if their consequent wins in the group matches and the eventual win over Simba queens in the semi finals wasn’t evidence enough, their display from the first whistle in the Final clash against Central Bank of Ethiopia must have dispelled such doubts.

As early as the 3rd minute the queens were already causing trouble for the bankers’ backline, with Teresa Engesha making what has become her trade mark run into the area from the left wing before cutting inside and sending a far post bound curler but goal keeper, Tarikua Balcha being equal to task pushing it out for the first corner of the match.

Vihiga’s strong start to the match would however get a setback early on as fullback Phoebe Owiti was stretchered off in the 8th minute forcing vihiga into an early change, bringing on Janet Bundi as a makeshift fullback.

The Queens continued marauding towards the CBE’s goal area and in the 21st minute, they had what seemed like a legitimate penalty call when Almenesh Asefa looked to have tripped Engesha, just before she took a shot inside the box but the centre referee waved play on.

Come the 27th minute and queen’s semi final heroine Jentrix Shikangwa would strike again after Tarikua had spilled violet Wanyonyi’s long range strike her way, she was all but thankful to bundle home for Vihiga’s opener.

CBE would try to get an equaliser but it was just not their day, their play lacking the usual fluidity and the neatly stringed passes that have become to be associated with them through out the tournament were evidently missing. Notably Medina Busser and Loza Geinoire, the bankers’ lead assasins had been tightly marked through out the first half rendering them ineffective.

With the half time whistle beckoning Teresa went on another rampage, this time from the right hand side, leaving her marker for dead and into the box, but her attempted cut back was somehow blocked for a fruitless corner, sending the match to a 1-0 break in favor of Vihiga.

Come the second half, vihiga continued dominating but in the 52nd minute, the bankers would against the run of play get an equaliser as Vivian Makhoha headed into her own net from a somewhat harmless freekick from the right.

The equaliser seems to have stirred things and vihiga went all out in search of a second. In the 59th minute, the sharp and hard shooting violet Wanyonyi sent a ferocious shot towards the bankers goal, and with Balcha well beaten, the woodwork would deny vihiga a second as CBE survived.

In the 64th minute CBE suffered a blow of their own as dependable centre back Tizita Meskel was stretchered off after injuring her ankle.

Come the 66th minute, it was another Jentrix moment as she sent a thunderbolt shot from the edge of the box, the goal keeper spilling it her way but her follow up shot from close range going over the bar.

Vihiga kept piling more pressure on their opponents and in the 69th minute Shikangwa again had her well taken shot from inside the box grace the side netting so much to the bankers relief.

As fulltime approached both teams seemed to be more cautious not to concede a goal late on but as it had been all evening it is vihiga who would get more scoring chances. In the 80th minute Wanyonyi sent a low drive from 25yards out forcing TARIKUA into a save for a vihiga corner.

In the 85th minute ,the goal keeper was again called into action after violet had beautiful brought down a ball inside the area and with acres of space the pacy winger sent another heavy shot towards the bankers goal, but somehow the goal keeper punched it away. CBE surving for the upteenth time in the match.

AT 90minutes, the game dead locked at 1-1, vihiga looked destined for a frustrating fulltime result. BUT deep into extra time Shikangwa would have her moment from the penalty spot after Violet Wanyonyi was brought down in the area.

The in form Shikangwa stepped up and showed ice cold composure to riffle her penalty to the top corner for Vihiga’s winner over CBE.

A win that not only earned them sweet revenge over their group opener tormentors but also assured them of a spot in November’s inaugural Caf women champions league tourney in Egypt. Additional, the KWPL champions also walked home with a $30,000 winners prize money.

JENTRIX for her heroics through out the tournament, was feted as the tournament’s MVP. Other notable winners were loza Geinoire and Daisy Nakaziro for the tournament’s top scorer and golden glove awards respectively. Lady doves of Uganda were feted as the second runners up after they had beaten Simba queens of Tanzania in the third place play offs by 2-1.