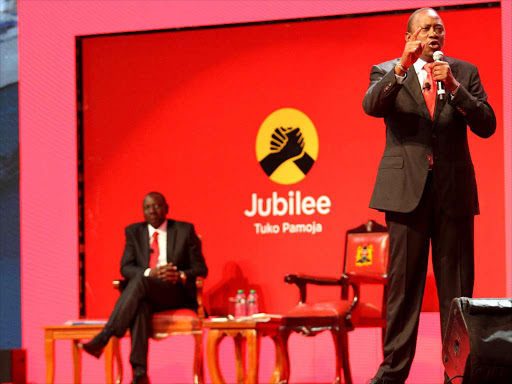 The ruling Jubilee Party (JP) has redesigned its logo and dropped all colours associated with the then Deputy President William Ruto’s United Republican Party (URP), which was its key component.

The new logo, forwarded to Kenya Industrial Property Institute (KIPI) for trademarking, features a dove (in place of clasped hands) and is red and white in colour. The party’s motto ‘Tuko Pamoja’ has now been changed to ‘Mbele Pamoja’.

The new changes might as well be a clear indication of a fall-out between President Uhuru Kenyatta and his deputy William Ruto owing to the fact that URP was Ruto’s brainchild.

The changes come months after Jubilee Party revealed that they are planning a major rebranding as a stepping stone for its imminent coalition with Raila Odinga’s Orange Democratic Party (ODM).

Anyone who might wish to oppose the party’s new logo registration has until February 22, 2022, to present an objection to KIPI.

The complaint will be accepted upon payment of prescribed fees.

URP joined hands with the President Uhuru Kenyatta’s The National Alliance (TNA) among other parties which were dissolved to form Jubilee Party in 2016.

The Jubilee coalition comprising of TNA and URP won the presidential election with the then Deputy Prime Minister Uhuru Kenyatta  and the then Eldoret North Member of Parliament (MP)  as his running mate to form the government and succeed President Mwai Kibaki in the 2013 general elections.