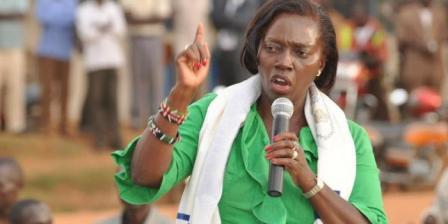 The National Rainbow Coalition in Kenya (NARC-Kenya) leader, Martha Karua, has been picked as the interim spokesperson of the Mount Kenya region.

Karua was unanimously elected spokesperson by a section of political leaders from the Mount Kenya Region in a consultative meeting held in Naivasha, Nakuru County.

This comes weeks after Martha Karua, The Service Party (TSP) counterpart Mwangi Kiunjuri and Chama Cha Kazi’s Moses Kuria came together with a view of crafting a political agenda for the region ahead of the forthcoming 2022 general elections.

In a press briefing, the leaders said they had come together to address permanent issues affecting their region ahead of the 2022 General Election.

“This forum is not limited to the presidential race but to unite the Central Region and the diaspora. It is not a short-lived forum but one that will outlive us,” Karua said.

The leaders, drawn from various parts of the Mount Kenya Region said they were working on a blueprint that would be served to all presidential candidates seeking votes in the region, known for voting as a bloc.

The leaders said they were aiming at protecting democracy, ensuring equity in resource allocation and decision making.

Prior to this, Karua had met Kuria and Kiunjuri and together they publicised their unity of purpose, adding they were committed to working together on issues affecting Mt Kenya and the nation “irrespective of our political affiliation.”

They announced a meeting would be held in Limuru before the end of 2021 to come up with a way forward for the region in the President Uhuru Kenyatta succession race.