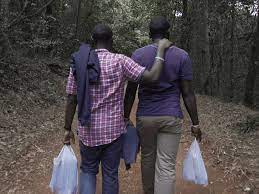 Peter Murimi’s film I am Samuel, has been banned in Kenya on claims g that the verité-style shot film is an intentional attempt to promote same-sex marriage as a valid alternative.

According to Kenya Film and Classification Board (KFCB), the film seeks to persuade viewers that the elder generation, which was earlier opposed to Lesbian, Gay, Bisexual, Transgender and Questioning (LGBTQ)+, is gradually coming around and accepting same-sex marriage as a normal way of life.

The Board’s Acting Chief Executive, Christopher Wambua, stated in a statement on Thursday, September 23, 2021 said that the picture obviously violates Article 165 of the Penal Code, which prohibits homosexuality, as well as the rules of Kenya’s Films and Stage Plays Act, Cap 222.

In Kenya, “carnal knowledge against the order of nature” is punishable by 14 years in prison, not to mention the stigma and harassment that comes with it.

I am Samuel, filmed over five years is an intimate portrait of a Kenyan man balancing pressures of family loyalty, love, and safety and questioning the concept of conflicting identities.

“This attempt is evident through the repeated confessions by the gay couple that what they feel for each other is normal and should be embraced as a way of life, as well as the characters’ body language, including scenes of kissing of two male lovers,” Wambua said on Thursday,.

“The documentary ultimately features marriage of two men, and concludes with the dedication of the film to the gay community,”

According to the board, this is an intentional, gross mis-representation.

“The 52-minute film is, therefore, an affront to Article 45 of the Kenyan constitution, which recognizes the family as the basic unit of society and defines marriage as between two persons of the opposite gender. Moreover, our laws, culture as well as our society’s belief is in the sacrosanct institution of family,” Wambua said.

The board also went after foreign organizations they said were funding the film and similar productions .

“Such funding should focus on production of content that is aligned with the laws,…international filmmakers must strictly adhere to the provisions of the Films and Stage Plays Act Cap222 of the laws of Kenya by acquiring filming licenses as well as submitting their content for examination and classification for age suitability,” the board said.