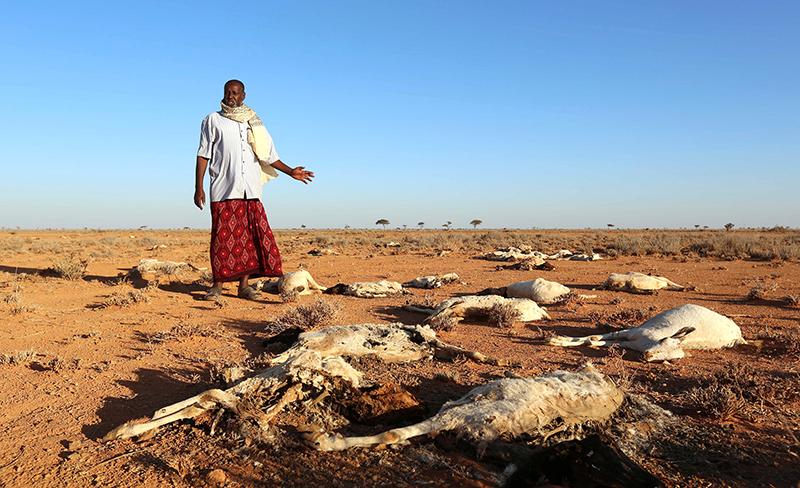 The government has declared the drought affecting parts of the country as a national disaster.

The government declared drought that is ravaging parts of the country, a national disaster following a meeting between President Uhuru Kenyatta with leaders from Kenya’s Arid and Semi-Arid Lands (ASALs) on Wednesday., September 8th , 2021

President Kenyatta hence instructed the National Treasury and the Ministry of Interior to spearhead government’s efforts to assist affected households including water and relief food distribution as well as livestock uptake.

The drought was declared in 29 counties classified under the Arid and Semi-Arid Lands (ASAL) where food insecurity has been experienced in recent months due to lack of consistent rains.

Last week, a section of governors appealed to President Kenyatta to declare the famine in ASAL areas a national disaster, in a meeting with the UN Resident Coordinator Stephen Jackson. The meeting was held to discuss mitigation for the ongoing drought in the northern Kenya.

The governors drawn from the Frontier Counties Development Council (FCDC), called for livelihood support, including the distribution of relief food to the most vulnerable and cash transfer programmes.

On Tuesday, Devolution Cabinet Secretary Eugene Wamalwa stated that at least 2 million Kenyans from 10 counties have been hard hit by the ongoing drought, during his tour to Garissa.

The CS who was in the county to assess the drought situation stated that the government was working with other agencies to assist the affected Kenyans.

Wamalwa said that the government was focused on enhancing access to water to residents across the country especially those in areas that have been badly hit.

“This Are the people that we are targeting to ensure they have clean water through the water tracking program we have started and also ensure that their animals get feeds. Through the Cash transfer programs we will be able to improve livelihoods of those affected,” he said.

The CS stated that so far, no human life has been lost due to drought adding that the government will expand the hunger Safety Net Programs to cover other affected counties including Garissa, Tana River, Isiolo and Samburu.

The ASALs make up to 89% of the Country with approximately 38% of Kenya’s Population. The ASAL regions host 70% of the National Livestock herd with an estimated value of Ksh.70 billion, but the residents are now staring at a bleak future due to the ongoing drought.