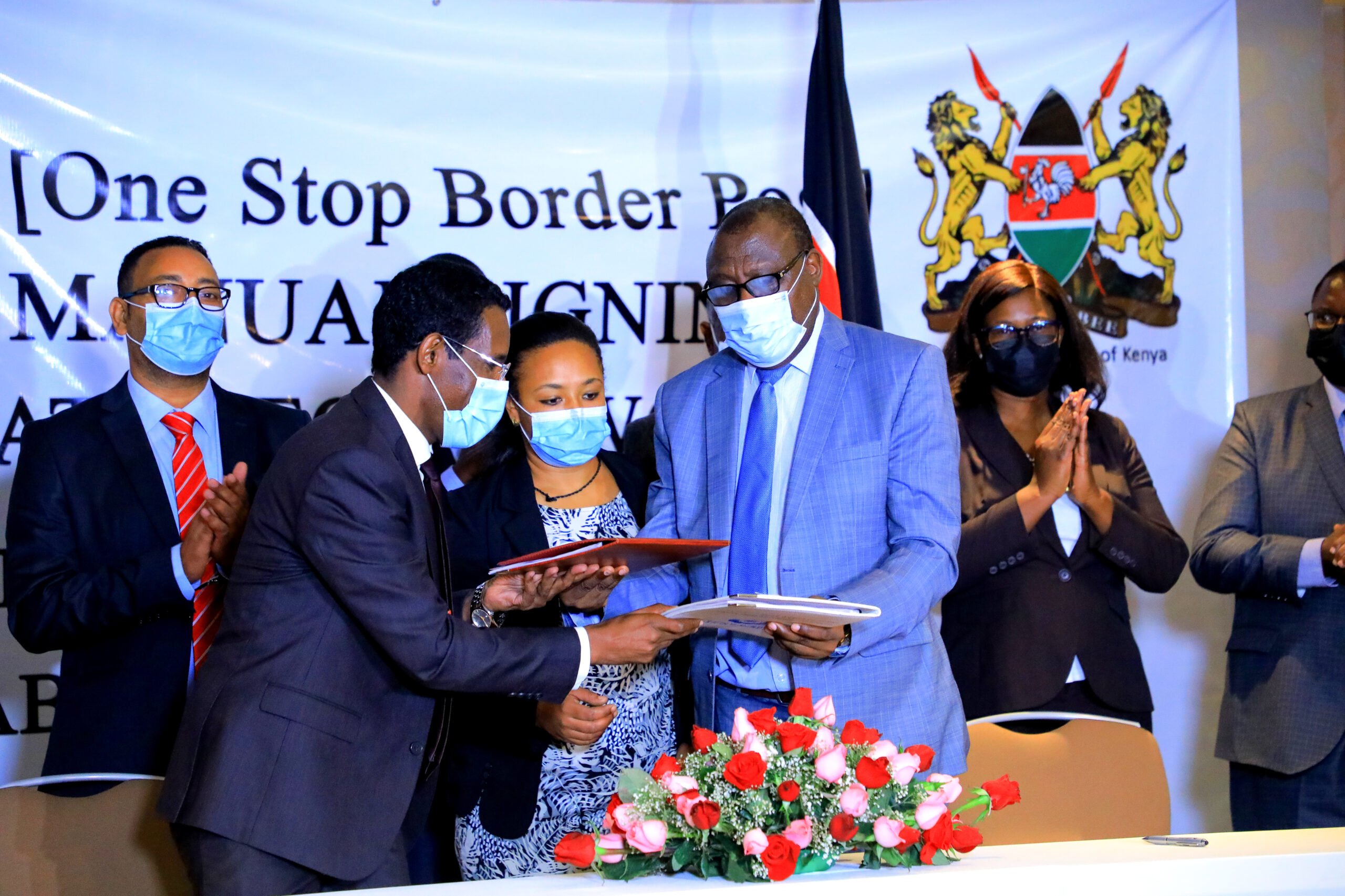 Kenya and Ethiopia have signed a procedure manual to guide the two nations in the implementation of the Moyale One Stop Border Post (OSBP) in Addis Ababa.

The Kenyan delegation led by officials from the Ministry of Interior and Coordination of National Government and those from key government agencies active in the borders, trade and logistics expressed optimism on the successful implementation of the Moyale OSBP.

The signing of the operational guiding document, Moyale OSBP Procedure Manual, marks yet another joint commitment between the two neighbouring countries to boost their long-standing relations. Both governments’ officials and private sector stakeholders present during the signing of the document expressed optimism on economic growth to be gained as a result of the full implementation of the facility.

Mr. Wilson Njega, Internal Security Secretary, who led the Kenyan delegation, said the signing of the Moyale OSBP Procedure Manual is a step towards enhanced cross border trade and movement of persons between the two countries. He noted that the OSBP is highly dependent on the Lamu Port- South Sudan-Ethiopia-Transport (LAPSSET) Corridor Project as it will ensure growth arising from better services and improved infrastructures.

Kenya Revenue Authority (KRA) Commissioner for Customs and Border Control Ms. Lilian Nyawanda emphasized the need to simplify trade to ensure goods flow seamlessly and within the confines of the Customs laws. Commissioner Nyawanda urged private sector to utilize the Moyale OSBP. In her address, she expressed confidence that the OSBP will bring immense benefits to traders from both countries.

On his part, Ethiopian Commissioner for Customs Mr. Debele Kebeta who led the Ethiopian delegation noted that the trade situation of Etho-Kenya trade is changing and the volume and diversity of goods traded between them is growing at higher rate. He added that the operationalization of Moyale OSBP will be a breakthrough to boost the trade relations and free movement of people between Ethiopia and Kenya.

The OSBP is majorly to facilitate trade by easing movement of people and goods across the border. It will also reduce transport and shipping costs of goods between the two countries and improve people-to-people relations.

The signing of the Manual comes months after the two heads of State; His Excellency President Uhuru Kenyatta and His Excellency Prime Minister Abiy Amhed, inaugurated the facility on 9th December 2020. During the inauguration, the President said that with the completion of the Moyale OSBP, the two countries demonstrated the political goodwill to address the challenges and impediments facing businesses from both sides.

Also present as part of Kenya’s delegation during the signing of the procedure manual was Secretary of Management Secretariat Mr. Kennedy Nyaiyo among others. Other Kenyan government agencies participating include East African Community, Lamu Port-South Sudan-Ethiopia-Transport (LAPSSET) Corridor Development Authority represented and Kenya Ports Authority. The private sector was represented by Kenya National Chamber of Commerce and Kenya Association of Manufacturers among others.