Kenya faces a tough South Sudan side in Cecafa Under 23. 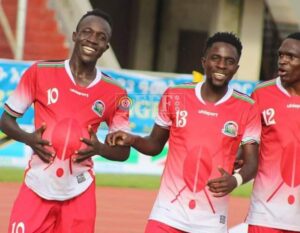 Omala replaced Meja in the second half but went on to score a late goal as Kenya edged out the minnow Djibouti 3-0 at Bahir Dar Stadium on Sunday.

Okumbi says Meja who has been prolific this season netting 11 goals in the local league is the right choice but didn’t rule out starting Omala against South Sudan.

“Meja has been performing in the league while Omala is one of the best strikers in my squad. I can start with either of them then another can come later in the game,” Okumbi told this scribe from Bahir.

While Meja has been a regular in the league, Omala has not featured in competitive football since June 12 when he terminated his lone deal with Swedish Division One Side just after joining them a month earlier . The lone deal which made him temporarily leave Gor was to run till December this year.

On the game, Okumbi said it would be tough and urged his side to be worry of South Sudan attack. However, he was optimistic of turning table on the youngest African Nation.

“Not an easy game, different game with different mentality and tactical set up, so there’s nothing like over confidence,” added the Posta Rangers coach.