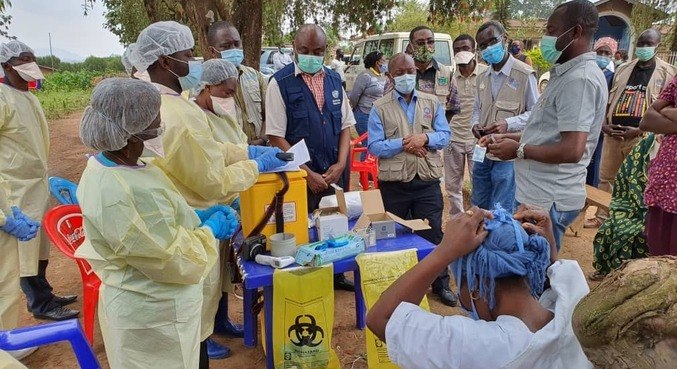 The Government of Kenya has issued an Ebola alert and called for extra care, especially in the counties bordering Uganda.

“The government has released an alert to all counties to screen at risk populations including travellers, truck drivers, bush meat handlers and health care workers. Sensitise the community to identify suspected cases,” said Kagwe.

However, the minister said there was no need for panic but called on Kenyans to take heightened precautions while visiting Uganda and the Democratic Republic of Congo.

Kagwe directed that health workers be sensitised on infection, prevention and control (IPC) measures  and case and sample management.

He said the measures were taken after the Ministry received an alert from its counterpart in Uganda on the Ebola outbreak in that country.

Uganda reported that the outbreak was detected in Ngabano village of Madudu Sub-county, Mubende District.

One person, a 24-year-old-man, reportedly died of the disease on September 19.

The victim had been treated for other symptoms before developing Ebola signs. Health officials in Uganda are conducting tracing to identify any close contacts of the deceased.

Six deaths before the latest case are also under investigations. Kagwe said Uganda had reported Ebola cases in the past, largely attributed to frequent outbreaks in Democratic Republic of Congo (DRC).

Uganda and DRC share a long border that is porous.

“It is important to note that there is substantial human traffic between Kenya and Uganda for trade and other socio-economic activities. The main mode of transport is road, air and water through Lake Victoria. Some of the formal land crossings include border points such as Busia, Malaba, Lwakhakha, Suam and air travel through Jomo Kenyatta, Kisumu, Moi and Eldoret international airports,” said the CS.

He said the entry points puts Kenya at high risk of disease importation and Kenyans should be vigilant.

EVD is a severe, and often fatal, disease caused by Ebola virus.

The virus is transmitted to people from wild animals and spread in the human population through human-to-human transmission.

Based on previous outbreaks, Kagwe said up to 67 per cent of infected people die.

He also advised Kenyans to be on the watch out for any person presenting acute onset of fever, especially if in contact with persons with history of travel from Uganda and DRC in the last three weeks.

Other signs to be on the look out for are vomiting, diarrhea, abdominal pains, headache, sore throat, measles like rash, red eyes and bleeding from body openings.

“The Ministry of Health is committed to limiting public health threats and will remain vigilant to ensure that Kenyans are well informed and protected against any such threats including infectious diseases and that the citizens continue to receive quality health services,” said Kagwe.