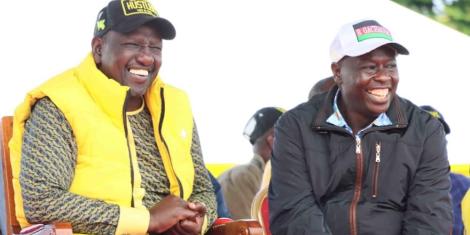 In a press conference on Sunday, May 15, DP Ruto named his preferred choice after 17 hours of deliberations with the coalition partners.

Rigathi Gachagua joined politics in 2017 when he vied for the Mathira seat. Before then, little was known about him. Gachagua, 57, was once President Uhuru Kenyatta’s personal assistant.

He ended up being the face of Tanga Tanga (a wing of Jubilee MPs allied to the DP in Mt Kenya).

Due to his deep pockets and outbursts against the government, he earned himself the title, of regional overseer of Ruto’s presidential campaign.

After years in civil service, Rigathi left to work for Uhuru as a personal assistant until 2008 when Uhuru joined former President Mwai Kibaki’s government after the disputed 2007 elections.

His dalliance with Uhuru faded after the famous March 2018 handshake between the President and ODM leader Raila Odinga when he claimed the president had betrayed his deputy.

He is also an alumnus of the University of Nairobi where he pursued political science and Literature before joining Oklahoma University in the US.