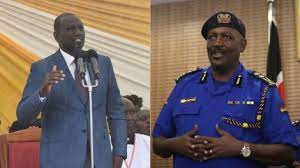 A case challenging the Government’s move to withdraw the security of Kenya’s Deputy President (DP) Dr William Ruto has been challenged in court.

Miruru Waweru and Angela Mwikali have file a petition said the DP’s security has been compromised following the move described by Inspector General of Police Hillary Mutyambai as “normal changes.”

The matter certified urgent and scheduled for hearing on September 21 before a Constitutional and Human rights judge.

“The matter is certified as urgent and admitted for hearing during the high court recess,” the court stated.
The GSU officers were last week replaced by Administration Police officers at the DP’s official residence in Karen, Nairobi and his rural home in Sugoi.

Ruto’s Chief of Staff Ken Osinde has written to the IG demanding they be reinstated even as the DP downplayed the matter.

On Tuesday, he welcomed the newly deployed APs at his Karen residence and treated them to a tea party.
He has also dismissed a security Parliamentary Committee investigating the matter, saying it should find something useful to do.