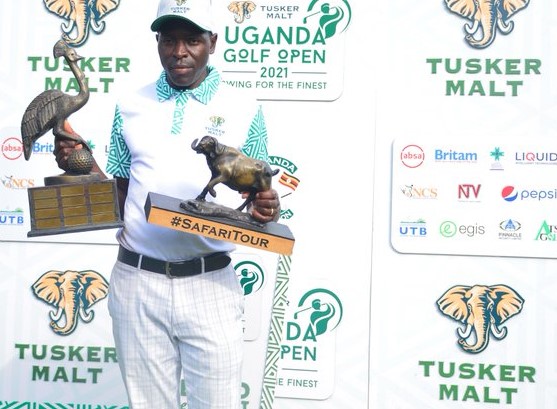 Madoya who re-captured his lead during Friday’s third round, yesterday completed a four rounds total of 13 under par 271 to win his first major championship, at the par 71 Entebbe Golf Club course.

It was however a close encounter with senior pro Dismas Indiza and round two leader Robson Chinhoi of Zimbabwe.

“I usually focus more on my game and the course than those I am playing with’’ said Madoya after posting one over par 72 in the closing round which included two bogeys at the front nine and three at the back nine with an eagle at the long par five-seventh and two birdies14th and 15th holes.

“I am extremely happy winning this event with a better score than the Entebbe Open three years ago where I won with eight under par. The few events we played at Vet Lab and Thika just before we came to Uganda real helped me to measure my form,” he said.

“”However the small put I missed at the 12th made realize that I could easily loose the event, that is what made me work hard for the two birdies at the back nine’’ said Madoya who won Ugsh 22.5 million, and who won by five shots from Dismas Indiza who, like Madoya, shot one over par 72 for a total of eight under par 278.

“The pin positions were tough today and that tells why there few under par scores in this final round. All the same I am very happy finishing second against such a strong field of young players’’ said Indiza who bogeyed the second hole though he recovered one at the fourth only to drop a shot at the sixth.

“I must admit that this course is currently in an excellent condition than I have seen it before. It offered one a chance to score low if one stays on course’’ said Indiza who finished with two back to back bogeys.

Meanwhile the Zimbabwean Robson Chinhoi posted two over par 73 for an all rounds total of six under par 278. He blamed poor putting in the final round particularly at the back nine. “I was striking the ball fairly well and gave myself many chances of picking up birdies but, did not  putt well” said Chinhoi who started with a birdie at the first nine though he made a double at the par three-10th  and later bogeyed the 15th and 17th.

A total of 96 payers had entered in the East Africa Breweries (Tusker Malit) sponsored event though only 33 survived the second round cut to continue with the tournament which is part of the Safari Tour.

The final Leader board;