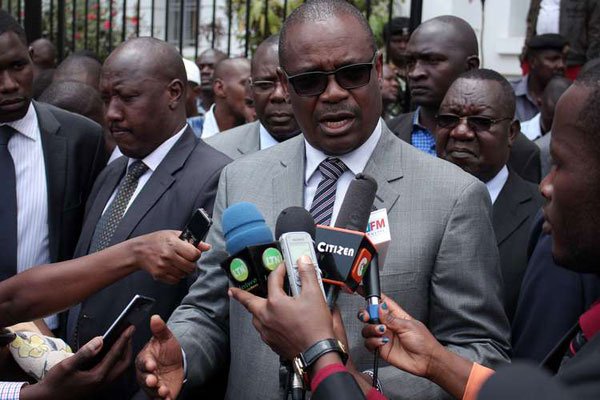 Kidero who unsuccessfully vied for the Homa Bay gubernatorial seat jumped into the war by supporting the sentiments expressed by the disgruntled Embakasi East Member of Parliament (MP) Babu Owino’s against the ODM party.

“Let’s understand where Hon. Babu Owino is coming from. ODM is what it is because of the youth; Majority membership. Zeal and passion for party support “Soldiers and army for the party” Yet, when bread is being shared nobody thinks of them,” he wrote on Facebook.

“It’s not just what has happened in the choice of parliamentary leadership but even in nominations to the county assembly,” his statement read.

Taking to Facebook, Kidero says while the youths form the majority of the party, the same fail to play out in leadership positions as most are sidelined.

He says they are left out from the initial stages of party nominations to county assemblies.

He claims the ODM party is a fortune for its owners. “ODM is personal property and a commercial asset which the owners use to maximize financial returns and optimize their wealth creation,” he added. This follows Babu’s claims of what he termed as “betrayal” and “blackmail” by the party.

“ODM Party, so many youth and myself sacrificed a lot and used our resources in the party over the years, our pay is betrayal and blackmail. It is OK. Tomorrow is another day,” he tweeted on Thursday.

Replying to his allegations, Narok Senator Ledama Olekina regretted that leadership positions had been awarded to new comers calling on old members to fight for their rights.

“It’s about time we demand what is ours. Enough of always being kept in arms’ way while others chill in their cribs and are rewarded with the lion’s share of party positions,” he said. The strong remarks come amid discomfort in the party over the lineup unveiled by the Azimio la Umoja – One Kenya coalition for various House positions.

The Raila-led coalition last Saturday fronted Ugunja MP Opiyo Wandayi as Majority Leader in the National Assembly, a decision that has sparked protests from a section of ODM MPs including the party chairman John Mbadi.

The nominated MP, who served as ODM Minority Leader in the 12th parliament, claims he was shortchanged by the party.

In a recent interview, Mbadi lamented that the decision to pick Wandayi for the job signified that he had failed in his leadership in the party and in his tenure as Minority Leader.

“Sometimes certain decision are made against certain people and we keep quiet and people start imagining that we are comfortable,” he said.

“I am not comfortable with this decision, the stature of the ODM chairman position must be respected. I can’t do the position of ODM chairman injustice by accepting that decision,” said Mbadi.

“If am the chairman in ODM and I lead the party outside then I don’t understand why when I come to the house, I am being led by someone who is my junior in the party. No democracy has such an arrangement.”

A section of the ODM MPs has also expressed reservations over the appointment of Suna East MP Junet Mohamed as the Majority Whip in the National Assembly. The MPs argue that Junet was among leaders who failed Raila in his bid to be Kenya’s fifth president, and should not have therefore been given any position in the House.

In the Senate, the coalition picked Kilifi Senator Stewart Madzayo as the coalition’s Minority Leader with Kitui Senator Enoch Wambua as his deputy.

The coalition also picked Isiolo Senator Fatuma Dullo as the Minority Whip with Nairobi Senator Edwin Sifuna as her deputy.

Raila has convened a crisis meeting early next week to address the emerging fallout.