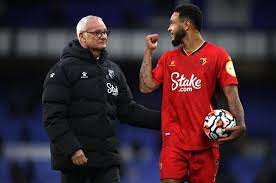 Josh King came back to haunt former club with a hat-trick to give Claudio Ranieri’s Watford a stunning 5-2 comeback victory at Goodison Park on Saturday, October 23rd, 2021.

Just a week after conceding five against Liverpool, Ranieri’s side this time hit five, including four in 14 minutes in a second-half flurry, helped by former Toffee King, scoring his first goals in 29 league appearances across three clubs having not made a single start in his 11 games at Everton last season.

Tom Davies put Everton ahead early on from close range after fine work from Demarai Gray (3), but Watford levelled through King’s far-post finish, awarded after a VAR intervention (13).

After a tough welcome back to the Premier League in the 5-0 defeat by Liverpool last week, Watford hoped the new manager bounce was delayed rather than destroyed, but Ranieri’s side got off to the worst possible start.

King, who didn’t score for Everton during his spell there in the first half of 2021, then struck twice inside six minutes before Emmanuel Dennis put the seal on an incredible comeback.

While Watford had never won at Goodison in any competition before this match, Ranieri has happier memories of trips to Everton – this was his fifth consecutive win at the ground.

It is a second successive home defeat for Everton’s former Liverpool manager Rafael Benitez and some boos greeted the Spaniard’s decision to replace Anthony Gordon with Richarlison in the second half.

Watford, having started life under Ranieri with an emphatic defeat against Liverpool, climb the table to 14th – suddenly well clear of the relegation zone.

Everton now go to Wolves on Monday Night Football on November 1, while Watford host Southampton in the Premier League on Saturday October 30, 2021..