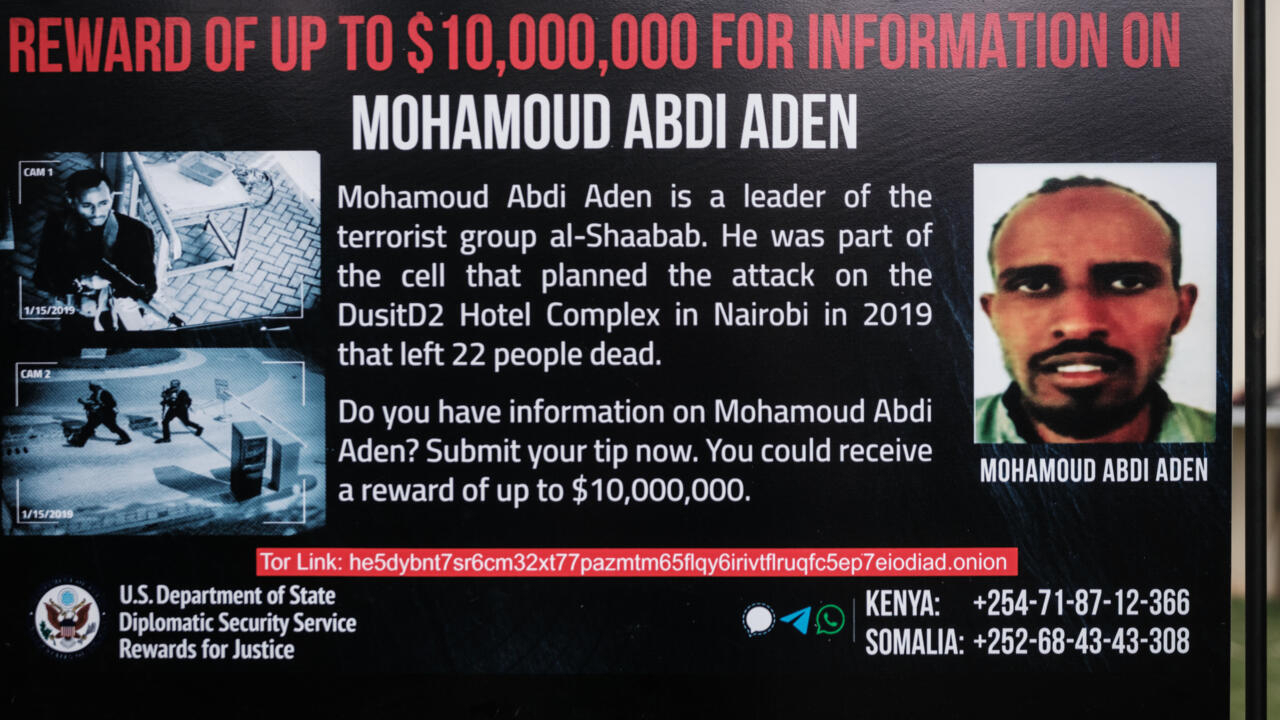 The government of the United States of America (USA) has offered a Sh1.2 billion (US$ 10 million dollars) bounty on anyone who will help capture Mohamoud Abdi Aden a wanted terror suspect linked to the DusitD2 Hotel Complex attack in Nairobi in 2019.

US ambassador to Kenya Meg Whitman led a delegation to the Directorate of Criminal Investigations Mohammed Amin where they accompanied DCI Mohamed Amin in making the announcement and appeal.

Mohamoud Abdi Aden is a leader of the terrorist group al-Shaabab.

US officials and their Kenyan counterparts said Mohamoud Abdi Aden was part of the cell that planned the attack on the DusitD2 Hotel Complex in Nairobi in 2019 that left 22 people dead.

The DCI boss Amin said Kenya will not be a place for hiding criminals.

“We are determined to ensure the wanted criminal is apprehended to face Justice,” he said.

There were speculations all players in the attack died but investigators have revealed Aden is still alive and was the mastermind. He could be in Kenya or Somalia.

The offered bounty is historical and is likely to draw much attention. On January 15, 2019, al-Shabaab terrorists killed 22 people in an attack on the DusitD2 Hotel Complex in Nairobi, Kenya.

A suicide bomber self-detonated outside of a restaurant in the courtyard.

Other terrorists, armed with automatic rifles and grenades, then sought to kill as many innocent bystanders.

They were however stopped by among others quick responses from various parties including security agencies.

The attack began at 15:28 with a detonation of a suicide bomber, Mahir Riziki.

The terrorists’ images emerged in December 2020 when al-Shabaab released a seven-minute clip showing them preparing to attack the complex.

The attack resulted in 22 civilian deaths. The four gunmen also died in the attack.

Officials say the DusitD2 attack was carried out on a significant date, coinciding with the third anniversary of al-Shabaab’s overrunning of a Kenya Defence Forces (KDF) base in El Adde, Gedo region.

Suspects Mire Abdulahi Ali, Mohamed Hussein Abdile and Mohamed Abdi Ali are facing at least five charges in connection with the attack where 22 people were killed and dozens wounded.

The charges include conspiracy to commit a terrorist act, aiding and abetting a terror act, committing fraud in the registration of documents and facilitation of a terror act.

The attackers had planned to stream the attack live on social media.

Their plans were cut short by the swift response from security agencies and other parties.

They were all killed a few hours later.

The hotel was reopened and closed months later due to the Covid-19 pandemic.

Other businesses are operating in the area.

The attack was claimed by al Shabaab, an affiliate of Al-Qaeda, which has repeatedly targeted Kenya over the presence of its troops in Somalia.