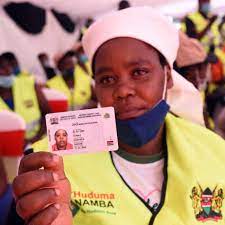 Kenya’s Government Ksh10.6 billion project is at risk of going down the drain after the rollout of the Huduma Namba card was declared illegal.

This follows a High Court verdict that the government violated the law in processing of personal data.

On Thursday, October 11th, 2021, Justice Ngaah faulted the government for collecting and processing data based on the invalidated Act.

“The order of certiorari (review) is hereby issued to bring into this honourable court and to quash the respondent’s decision of November 18, 2020, to roll out Huduma Card for being ultra vires of Section 31 of the Data Protection Act, 2019,” the judge ruled.

Huduma Namba was rolled out with pomp and colour last year. The first recipients of the new card were President Uhuru Kenyatta and First Lady Margaret Kenyatta.

Two days later, a case landed on her desk over the data collected by the government. The aggrieved party was Katiba Institute, which is led by legal scholar Yash Pal Ghai.

The grievance was that the government did not provide a guarantee against theft or misuse of citizens’ personal information.

This is the second time the government is on the receiving end over the project.

The National Assembly had enacted the Data Protection Act without consulting the Senate. After senators lodged a legal challenge, a three-judge bench declared 23 of the laws unconstitutional.