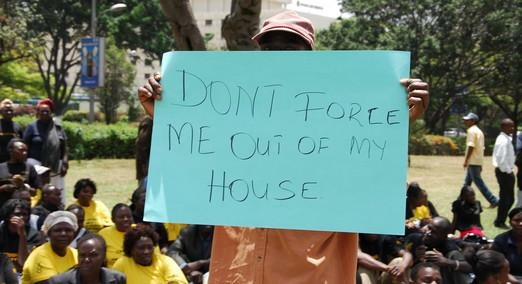 On the night of Friday 30th July 2021 and the morning of Saturday July 31st 2021 our lives were literally turned upside down.

At around 11pm – well past the set official curfew hours – as Tala Road in Nairobi residents, we noticed a large group of people walking around our compound. Since they were carrying flashlights, it was easy to spot them in the dark.

But even before the security arrived, the invaders started making such a huge din – very loud, ‘banging’ noises. We thought they were trying to break down the gates leading into the main house. The sound was deafening. And it went on and on and on. Bang. Bang. Bang. It was jarring.

When our security team arrived, they were surprised to find a group of about 15 hefty men busy erecting a mabati fence around our compound. Surprisingly, these burly invaders were under the protection of armed policemen.

Our security team attempted to engage the policemen in a conversation – what was going on at their client’s property? The policemen responded swiftly with stinging hostility. Who are you to ask us? We ni nani?! Tokeni hapa saa hii….

The security guards beat a hasty retreat. We listen in total disbelief, deep shock and horror. It was slowly dawning on us.

Our home was being grabbed right in front of our very own eyes. In the dead of the night. With the full involvement of the those authorized to protect us, the police.

This home had been bequeathed to us by our parents who acquired the property via a hefty mortgage 50 plus years ago.

We were raised here. We brought up our children here. We hold the title deed and are the legal administrators of this property. As a family, we have never fought over this home. There has never ever been a dispute over this same property. Who are these people? Who does this? Who comes into your home and brazenly claims it is theirs? Worse still who are these people who seem to be so bold!

The security team then proceeded to Runda Police Station to report this incredulous incident.

In the meantime, the banging was now in full force. Bang. Bang. Bang. Well past midnight. The security guards were dismissively told by the policeman on duty that they were well aware of the operation and were not going to record anything in the occurrence book. There’s nothing we can do, he said nonchalantly.

But there is an invasion. There are lives at risk. It is an outright violation. The security guards protested on our behalf. This fell on deaf ears. And only produced an indifferent shrug and a bland smile to boot.

The security officers once again, relayed this information to us.

We were totally dejected. Clearly, we were on our own. We were terribly scared. Confused. And also, very, very angry. Livid. How can this happen? The sheer audacity. The gall.

They continued to erect that fence all around our home…except for where the main house stands. Downing their tools at around 3am, they proceeded to blithely make themselves comfortable within the area they had fenced.

Seeing this monstrosity, the next morning was utterly, totally unbelievable. It was like watching a horror movie. Our home had been grabbed and cordoned off from us. Literally overnight.

On Sunday 2nd of August, someone’s proxy – presented themselves as the owners of our home. This was clearly someone at the behest of some powerful, connected and well-heeled instigators. He claimed they had a title deed which was 3 months old. Then why operate stealthily in the night? During curfew? We asked.

The restraint it took on our part not to confront this proxy was HUGE. It was nothing but pure grace that held us in check. We are now being asked to prove that our home is ours.

The grabbers’ proxy strutted around. He arrogantly gave the police a curt nod in agreement, said ‘Fine’ and left. It was totally painful to watch this. What is happening to our country?

We have on good authority that a very high-ranking government official is the person responsible for all this madness together with known cartels at the ministry of lands and legal firms. The strategy, take possession and fight it out in court. We are yet to find who is really behind this impunity.

But right now, as we move to the courts to get back our home, we are just praying for justice to be done. And hope that no other person ever has to go through this most frightening and harrowing nightmare.

Because in the blink of an eye, we are at risk of losing our 50-year-old home to a ruthless land grabber or a powerful cartel. Just because they can.

As narrated  Tala Road residents and victims of land grabbing