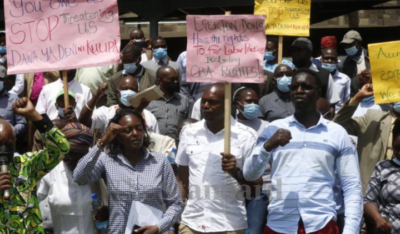 Vice-Chancellor Prof Isaac Kibwage said that the strike had paralyzed learning at the facility.

“We couldn’t continue holding the students any longer since no learning has been going on. We have decided to close the institution until a time when we shall resolve the issues,” said Kibwage.

The Chancellor said that the decision was arrived at following a meeting by the University’s Senate on the crisis.

“During the Thursday meeting, it was resolved that the university be closed indefinitely. We are still engaging the lecturers and shall recall the students immediately when we arrive at an agreement with them,” said Kibwage.

In a notice to all students and staff issued today,26th November 2021, the University Registrar in charge of Academic Affairs Prof Mwanarusi Saidi directed the students to vacate the university premises latest by Tuesday, November 30, 2021.

The lecturers under the leadership of the University Academic Staff Union (UASU) downed their tools earlier this month in protest against what they termed as unfair labour practices by the university management.

Internal dispute resolution committee and the UASU officials have been holding a series of meetings at the university without reaching an agreement over their grievances for over three weeks now.

Speaking during the launch of the strike, the lecturers led by UASU Egerton Chapter Chairperson Prof Mwaniki Ngari said that the university had been making unclear payments to them.

“The university management has refused to address the problem of our salaries, enhancements and deductions for a long time,” said Prof Ngari.

The university owes the staff salary arrears dating back to July last year when it slashed their pay by 40 percent as part of its measures during the Covid-19 pandemic.

“The university has continued to receive monies from the exchequer but the management doesn’t want to engage us on how the same should be utilized to unlock this stalemate,” said Prof Ngari.

The lecturers are also accusing the management of mutilating a national Collective Bargaining Agreement (CBA) which they say a majority of other public universities have obeyed.

“The national 2017-2021 CBA was negotiated and upheld in a January 2021 court ruling. The refusal by Egerton University to implement it as others abide by its provisions raises questions about the management,” said Dr Grace Kibue, UASU Chapter Secretary.

The workers accused the management of blatant violation of their fundamental rights citing intimidation and use of demeaning language to address them.

“Apart from the CBA, we had a return to work formula negotiated and signed in November 2020 for unpaid salaries dating back to July 2020. This reckless disregard of our rights is in stark violation of our Constitution, national and international labour laws,” said Kibue.

Kenya University Staff Union (KUSU) members are currently on a go-slow and have been joining UASU members in picketing.

KUSU Egerton Branch chairperson Kipchumba Ruto explained that the university had failed to remit statutory deductions made on their salaries.

“The University has not been remitting deductions for retirement benefits, health covers and third party deductions such as bank loans despite slashing them off our pay. This has caused us embarrassment such as when we can’t afford our own health care or get auctioned,” said Ruto.

Prof Kibwage has however maintained that the institution is cash strapped and they would engage in dialogue to reach an amicable solution as they wait for capitation from the National Treasury.