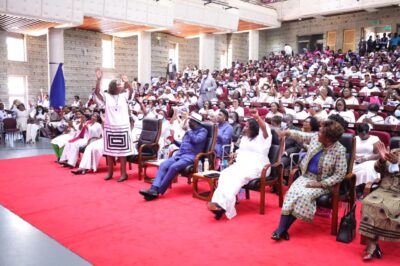 Kananu was speaking during the Azimio La Umoja meeting at the Catholic University of Eastern Africa in Rongai.

Kananu also urged all Nairobi residents and Kenyans at large to support the Azimio La Umoja movement propagated by ODM leader Raila Odinga which is aimed at uniting the country.

“Let’s all support this movement, I fully believe in it. Once in place it will do away with corruption, divisive electoral processes, insecurities and among other vices. As we gear in for general elections next year let’s rally on peace, we don’t want to experience political violences like the past.” She added.

Governor Kananu thanked the ODM party leader for his contribution in promoting peace, cohesion and unity in the nation.

She also attributed that Raila’s struggle to fight for freedom and liberation have resulted in fruits that most of Kenyans enjoy today, adding that Mama Ida is a strong woman who stood firm with great faith on how she single-handedly raised her children when Raila was in detention.

“You have sacrificed on everything and when the history of this nation is finally written, it can not be a footnote, neither can it be a chapter. It must be a whole book. Thank you Baba.” She said.

Raila also welcomed Kananu’s ascendancy to office and he urged her to focus on service delivery.

The party leader said once elected he will put more effort on small scale enterprises (SMEs) in ensuring that they’re well motivated and well funded.

He also asked farmers to focus more on innovation and smart agriculture.

“I acknowledge Nairobi Governor Ann Kananu and also ask farmers to start smart agriculture. We must empower our SMEs give them proper capital.