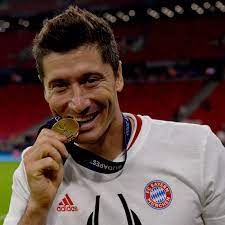 Lewandowski tapped home from a yard out to score for the 13th straight home game in the league, and set a new record. He has now scored against all of the current Bundesliga sides.

Joshua Kimmich scored twice after Leroy Sane hit an excellent free-kick to begin the rout.
Serge Gnabry and Eric Maxim Choupo-Moting also got on the scoresheet as Vasilis Lampropoulos put through his own net.
It was a milestone for Kimmich by scoring his 50th Bundesliga goal for Eric Maxim Choupo-Moting rounded off what was a record defeat for the visitors
Bayern were playing in a dark green Oktoberfest kit, their fourth different shirt this season.
The thrashing takes Bayern’s goal tally to 20 after their opening five games of the season, although Wolfsburg can move back to the top of the table if they beat Eintracht Frankfurt on Sunday.