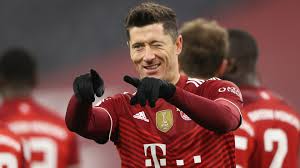 Lewandowski gave Bayern an early lead, with Corentin Tolisso adding a second before the break.

Lewandowski made it 3-0 before completing his hat-trick late on.

Bayern’s 66-game scoring run sets a new club and Bundesliga record, eclipsing their own 65-game streak between February 2018 and February 2020.

In reaching 300 Bundesliga goals, Lewandowski became the first player to do so since Bayern great Gerd Muller in 1976.