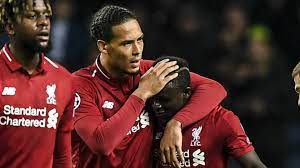 West Ham beat Liverpool 3-2 in the Premier League on Sunday to deny Jurgen Klopp’s side a club record of 26 matches unbeaten in all competitions.

West Ham ended the Reds’ 25-match unbeaten run was shattered in a 3-2 defeat at the London Stadium on Sunday. Jurgen Klopp’s side would have broken the club’s record unbeaten run in all competitions, which had stood since 1982, if they avoided defeat in east London.

Liverpool were condemned to their first loss since Real Madrid beat them in the Champions League quarter-final first leg in April.

Liverpool hadn’t lost in the league since Fulham won at Anfield in March. It was an day to forget for Alisson, whose own goal put West Ham head in the first half.

West Ham’s first league win against Liverpool since 2016 was also their manager David Moyes’ maiden league success against Klopp at the eighth attempt.

Liverpool went into this game looking to set a new club record of 26 games unbeaten, as well as get a win that would move them up to second and within a point of leaders Chelsea.

Liverpool have won eight and drawing two of their 10 encounters against West Ham prior to Sunday’s game, but rarely did the Reds look like extending that unbeaten run in this game.

It is now four league wins in a row for Moyes’ side and with the Hammers also in the Carabao Cup quarter-finals and the knockout phases of the Europa League, fans can rightly dream of more magical moments to come this season.

Liverpool fell behind early on when  goalkeeperAlisson, under pressure from Angelo Ogbonna, flapped at Pablo Fornals’ corner and succeeded only in helping the ball into his own goal.

West Ham regained the lead midway through the second half when Fornals was slipped through on goal and Alisson was unable to keep out his low shot.

That goal led to the London Stadium exploding into deafening noise, which became even louder when Kurt Zouma headed in a corner minutes later.

Divock Origi swept in a second on the turn to give Liverpool hope of rescuing something, but West Ham kept their nerve to take the three points.

The Hammers are third, level on 23 points with second place Manchester City and three points behind leaders Chelsea. Liverpool, meanwhile, drop to fourth on 22 points.