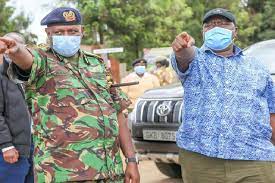 Matiangi: Why Ruto is bitter with IG Mutyambai

The DP on Thursday labelled Mutyambai as the “most incompetent” police IG in Kenya’s history while expressing doubt about the command of police ahead of the polls.

“We doubt the command. We have a serious problem with the command of the police. We have the most incompetent Inspector General of the Police,” he said.

“In fact, the current IG is the president of Kenya (Uhuru Kenyatta), who is the leader of Azimio.

He spoke during a meeting with the delegation of the International Republican Institute (IRI) and the National Democratic Institute (NDI) at Karen.

Addressing a rally in Kisii on Friday, Matiang’i went bare-knuckle against the DP accusing him of being bitter with Mutyambai because of failed business deals.

“Hii mambo ambayo Mutyambai anatusiwa hapa kuambia ati he is the most incompetent police IG we have had. The only problem with Mutyambai is because he refused to buy police boots for Sh13,000 that was being sold by your (Ruto) friends. Mutyambai accepted to buy boots for Sh2,900,” he said.