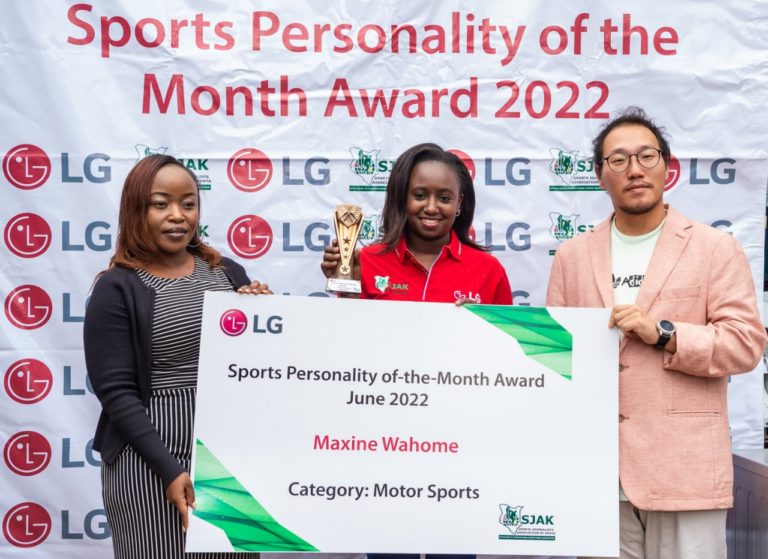 Kenya’s top female driver Maxine Wahome has been named as the LG/Sports Journalists Association of Kenya (SJAK) sports personality of the month for June, following her WRC3 historic run at the WRC Safari Rally.

Wahome, 26, became the first ever woman to win a major WRC race category when she clinched the WRC3 title in the dusty terrain of Naivasha last month, cruising in the Ford Fiesta Rally 3 Car for the first time ever.

For her award, Wahome not only gets an engraved trophy but an LG Intelligent Washing Machine worth Sh85,000.

“It’s such a great feeling to be crowned the monthly winner more so in a field where Kenya’s long and middle distance runners have reigned supreme globally,” she said.

“My goal in the Safari was just to learn the car more and day by day improve on my speed and driving lines, but I am glad I delivered the all-important win incidentally on my second appearance of the iconic event,” an excited Wahome said as she received her award.

She added; “Wednesday of the rally week was my first time in the car. I normally drive a Subaru Impreza N12. The only testing I got with the car was on Tarmac, which is completely different to the Safari.”

Wahome’s rally very nearly unraveled on the Friday itinerary when she was sidelined by an engine control unit fault on the final test, but the youngster was able to restart on Saturday and reclaimed the top spot as her rivals came unstuck.

Kim remarked: “LG Electronics East Africa is proud to be associated with Kenya’s talented sports personalities who continue to excell both in Kenya and overseas.”

“Maxine’s feat has inspired countless other women across the globe to approach the male-dominated sport with the much-needed resilience and gusto.”

“As a corporate entity, we are glad that this award continues to reward excellence over and above positioning juniors and women athletes as the future of sport in the country.”

On his part, SJAK President Chris Mbaisi thanked LG for their longstanding generous support of the sporting agenda in the country.

“The award continues to ascertain latent talent in Kenyan sporting circles and indeed motivate sportsmen and women for their stellar performances.”

“Our longstanding partnership with LG Electronics is a clear indication that the Kenyan sporting area is a world of possibilities. I congratulate Maxine for her extraordinary feat. It put Kenya on the world map,” Mbaisi remarked.

Newer Post
Swedish Based Roam Electric partners with Kengra Logistics for Electric Motorcycles in Kenya
Older Post
Elections 2022: How to Check Your Polling Station via Phone