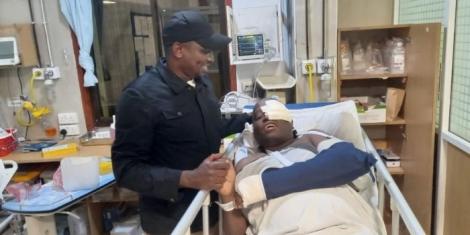 The controversial blogger was found naked in Nairobi’s Lucky Summer area, Kasarani by a taxi driver. At the time he told the driver he thought he was in Eldoret.

Itumbi had fractured both his two legs and his left hand with injuries on most of his body parts at the time he was found.

When found, his left eye was bleeding an indication it was injured whereas his mobile phone was missing then.

His brother David said Itumbi said the people who abducted and beat him up claimed to be police officers. Police have denied knowledge of the claims.

“On his own account he was arrested by police and beaten and tortured. This is the state we found him in. We thank God that he is alive,” said David.

According to David, is that Itumbi told him that his abductors changed to different cars as they drove around with him. They communicated on phones saying they were on way to Eldoret which made him think it was true.

Itumbi was later taken to Uhai Neema hospital in Kasarani area for attention and put on a drip and later moved to Nairobi West.

“He is badly injured but he is a live,” his brother David said. A number of politicians and friends rushed to the hospital to see him when news broke out he had been found and rescued.