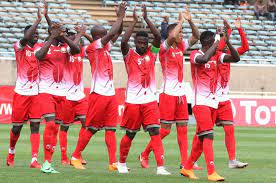 The betting firm takes over the sponsorship from OdiBets who parted ways with Football Kenya Federation (FKF) after the local governing soccer body ended their partnership with the betting last month.

As part of the deal, the gaming firm will give the Football Kenya Federation Sh 3 million to cater for the team’s preparations for the next three matches.

Speaking during the launch on Saturday October 9th, 2021 at the Nyayo National Stadium ahead of the World qualifier against Mali, Mozzart Bet Country Manager Sasa Krneta assured the team of his company’s continued support.

“We are committed to supporting Harambee Stars through sponsorship and cash as they represent our country and make us proud. This will be continuous sponsorship depending on their progress in the competition. But let’s try and be kind to the team regardless of the performance,” said Krneta.

FKF president Nick Mwendwa, expressed gratitude and thanked Mozzart Bet for choosing to add value and believing in the team and federation.

On September 22nd , 2021, FKF terminated their contract with OdiBets saying they cannot tolerate a sponsor who wants to spoil the gains the federation has made in developing Kenyan soccer.

“The Football Kenya Federation has terminated its partnership with Odibets with immediate effect due to breach of contract by the betting firm.

“The federation remains committed to developing win-win partnerships for the good of the game and will continue to engage wholeheartedly with partners who share our commitment and vision for the growth of the game in Kenya,” FKF said in a terse statement.

Football Kenya Federation President Nick Mwendwa insists they had to let OdiBets leave because they did not honour their contract.

In a communique received by Kenyaonlinenews.com, the federation said the betting firm breached the terms of the contract

The administrator insists they could not let the sponsor spoil the game. He further stated they had to let them go amicably to ensure other potential sponsors do not find it hard to partner with the federation in future.

“So we decided to cancel their sponsorship because we are giving them mileage; by naming the league after their name and using their kit, but they are not honouring their part of the deal,” Mwendwa continued.