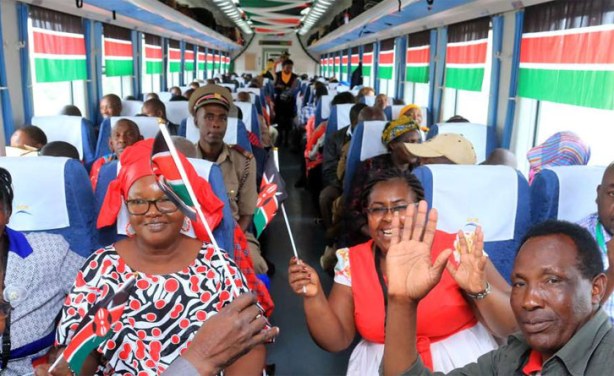 The passenger train service on the Nairobi-Kisumu route has started and  the maiden trip arrived at the Kisumu Station on December 17th, 2021.

The trip resumed today, Friday, December 17, 2021 for the first time in 10 years after services were suspended due to a dilapidated railway line.

The train arrived in Kisumu from Nairobi at 5.55 pm, a journey of about 12 hours, that began at the Nairobi Central Railway Station at 6 am.

The trip has had 18 stops throughout the day, to allow passengers to disembark, board, stretch, have bitings, and lunch along the way.

Nakuru was the first stop where passengers were allowed to disembark and others to board.

It took the commuter train five hours to reach Nakuru City after leaving Nairobi at 6 am.

Stop-overs took about two minutes’ maximum before leaving for the next station.

According to The Standard Journalist George Maringa on board, the stop at Nakuru station was the longest, which took some 10 minutes.

“It was a smooth ride with great service, warm passengers and crew, and a round-the-clock restaurant. We even had Wi-Fi on board,” he said, reminiscing of his experience.