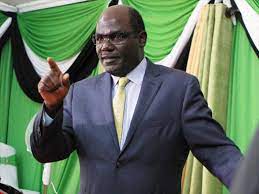 Nomination Rules of All Political Parties Rejected by IEBC

With less than a year to Kenya’s General Election scheduled for August 9th, 2022, the Independent Electoral and Boundaries Commission (IEBC) has rejected nomination rules submitted by all Political Parties.

This comes months after the electoral commission introduced a raft of new guidelines to political parties on the submission of nomination rules.

In a Press release on Wednesday, November 10, IEBC chairman Wafula Chebukati directed the parties to revise and submit their nomination regulations by Tuesday, November 16.

“None of the political parties have complied with the requirements of the law and has in the premises communicated to them to revise their party nomination rules and procedures pursuant to section 27 (2A) 9b) of the Elections Act 2011,” Chebukati’s statement read in part.

Further, the commission reiterated that it will only issue a certificate of compliance to political parties whose nomination rules are compliant with the prescribed regulations.

“Non-compliant rules will be declared null and void. The affected political parties will not be issued with a compliance certificate, therefore will not take part in the upcoming General Election,” he added.

On October 15 this year, the commission released the new party nomination guidelines for the party primaries scheduled to take place between January and May 26 next year.

“Pursuant to the Commission’s published Elections Operational Plan and the provisions of Section 27 of the Elections Act, 2011, all political parties intending to participate in the 2022 General Election are required to submit their Political Party Nomination Rules to the Commission by close of business Monday, October 18, 2021,” Chebukati stated at the time.

The guidelines also stipulate that the party nomination rules should prescribe the process by which political parties nominate candidates in accordance with Article 88 (4) (d) of the Constitution and as guided by the Elections (Party Primaries and Party List) Regulations, 201