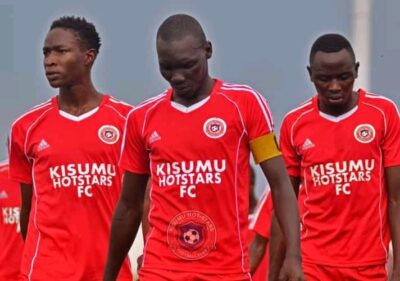 National Super league side Kisumu Hot stars have been relegated to a further lower tier league Division One after failing to honour their last three fixture.

“It is automatic that the team has been relegated after failing to honour three matches without showing a worthy cause,” confirmed  asource from Football Kenya Federation.

“The move  is in accordance with the FKF rule,which states that a club which fails to honour three league matches in the same season without providing written explanation acceptable to the committee will be suspended for  the rest of the season and relegated to lower league for the next season, “ the source further explained.

Reached for comment, ,Kisumu Hot stars team manager  Andrew Otieno said they had not received an official letter from the federation informing on their relegation as they wait a decision they had earlier filed at the sports tribunal on their status in the second tier league.

Kisumu Hot Stars had gone to the sports dispute tribunal contesting on the three points awarded to Shabana after they failed to show up for their league match slated at Narok stadium.

“We have not received any letter informing us that we have been relegated. It is true had filled a case at the SDT and we wrote to FKF telling them to put our matches on hold due to COVID-19 restrictions. However, they have not postponed our matches,” defiant Andrew Otieno said.

Kisumu Hot Stars under the tutelage of former Chemelil Sugar tactician Charles Odera are 18th on the log on 27 points from 25 matches.