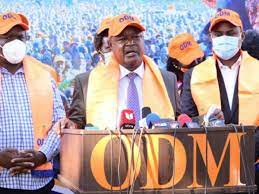 The High Court has upheld politician Peter Nabulindo’s election as the Member of Parliament (MP) for Matungu Constituency in Kakamega County.

Justice William Musyoka on Monday, September 27th, 2021, dismissed the petition filed by Orange Democratic Movement (ODM) candidate David Were , who lost to Mr Nabulindo of the Amani National Congress in the mini-poll held on March 4.

The IEBC declared Mr Nabulindo the winner after he garnered 14,257 votes while Mr Were came second with 10,565. Candidate Alex Lanya of the United Democratic Alliance (UDA) was third with 4,813 votes.

Mr Were a former Communications Assistant Minister in the Mwai Kibaki regime disputed the outcome of the poll and challenged the results in a petition he filed at the High court.

The judge ruled that Mr Were will bear the cost of the petition which stood at Sh3 million.

The Independent Electoral and Boundaries Commission (IEBC), Returning Officer John Kirui and the MP will each receive Sh1 million.

Justice Musyoka said Mr Were agents, who testified during cross-examination, did not prove that they were denied access to polling stations.

“They all confirmed that they were the first persons at the stations on polling day. There is no evidence of voter intimidation and none of the witnesses indicated the occurrence of violence,” said Justice Musyoka.

In his petition, Mr Were accused MP Nabulindo, Senator Malala and politician Stanley Livondo of inciting their supporters to cause violence during the vote.

The former Matungu MP claimed that a group of youths went on a rampage on voting day, attacking and injuring voters, election officials and members of the public.

He said the violence disrupted the process and scared voters away from polling stations.

Mr Were further alleged that the majority of his agents in some of the 116 polling stations were denied entry during voting and the count that followed.