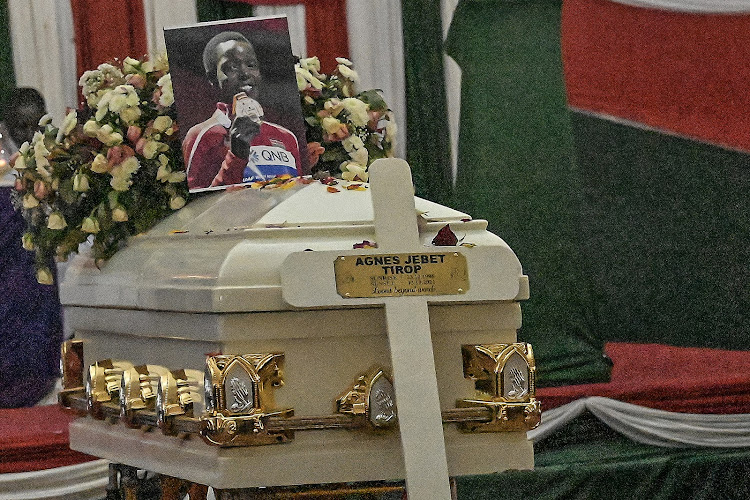 World women’s 10km record holder  Agnes Tirop, who was found murdered last week, was laid to rest on her birthday  in her family home in Mosoriot, Nandi County on Saturday, October 23, 2021.

Her funeral was held on the day she would have turned 26. Mourners including fellow athletes lined up to scatter flowers on a white coffin.

A picture of Tirop, grinning and holding up a bronze medal, was placed on top of the coffin.

Tirop was found stabbed to death in her home in the Rift Valley town of Iten on Oct. 13, in an incident that has shone the spotlight on violence against women in Kenya.

The funeral was attended by family, close friends and colleagues.

Tears flowed freely as athletes, officials, as well as family and friends, recounted their best memories of the 25-year old.

“It is so painful to lose such a talented athlete . She is somebody I have interacted with throughout my career and competed alongside her at the World Cross Country Championships in March 2013 in Poland. Agnes has been a friend and someone we have grown with in athletics,” Olympic 1500m champion Faith Kipyegon said.

The athletes also held a peaceful procession in protest against Gender Based Violence against athletes.

Their voices against this vice could not be any louder, beginning from a banner emblazoned with Tirop’s image and the message, “End Gender Violence”, to their statements at the requiem mass, to nail the point home.

Across their t-shirts were images of Tirop’s wide smile after clinching bronze in the women’s 10,000m at the World Championships in Doha, Qatar in 2019.

From the morgue, the cortege snaked its way along the Eldoret-Kapsabet Road to Kapnyamisa Primary School in Nandi County for a requiem mass as onlookers waved goodbye to their fallen heroine.

Police arrested Tirop’s husband, Ibrahim Rotich, in the coastal city of Mombasa last week, and he has been arraigned on suspicion of her murder. Neither Rotich, nor his representatives, have made any public comments on the case.

Last month, Tirop smashed the women-only 10km world record in Germany. She won bronze medals at the 2017 and 2019 World Championships in the 10,000m.