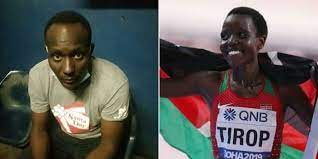 Olympian Agnes Tirop’s Boyfriend to Be Charged for Murder

The High Court in Eldoret ordered that Ibrahim Rotich be produced before the court on November 16th, 2021 to be charged with the murder World 10km record holder Agnes Tirop.

Deputy Registrar of the High Court in Eldoret Diana Milimo on Tuesdayfurther  directed thatRotich – the prime suspect in the murder of the athlete – be taken for mental assessment at the Moi Referral Hospital before being charged.

State Counsel David Fedha said the suspect had to undergo the mental tests before being charged.

“We are here just to apply for the suspect to be escorted for the mental assessment before being brought back for plea taking,” Fedha said.

Accused’s lawyer Ngige Mbugua said the defence was not opposed to the application for mental assessment.

“We had already made the same application at a the lower court in Iten and we do not object to the application,” Mbugua said.

Rotich first appeared before Resident Magistrate Naomi Wairimu in Iten after being held for 20 days to facilitate investigations into the death of the athlete.

Wairimu directed that he be transferred to the High Court in Eldoret He is expected to answer to murder charges on Tuesday next week.