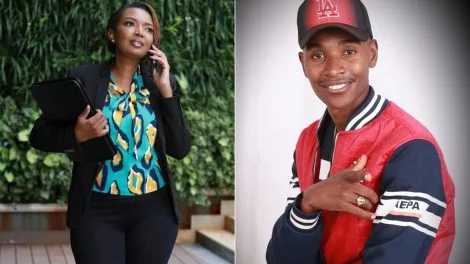 Former Nairobi City County Government Executive for Agriculture Karen Nyamu has revealed that she was physically abused by her baby daddy Samidoh.

Nyamu revealed the ordeal on her Insta stories narrating how Samidoh battered her despite being three  months pregnant for him. Nyamu confirmed that she is expecting Samidoh’s child just months after they welcomed a son.

Nyamu who contested in the 2017 Jubilee Party nominations for Nairobi Women Representative revealed that Samidoh beat her up over allegations of cheating on him.

Nyamu revealed that Samidoh beat her up over allegations of cheating on him. Samidoh was infuriated by being suspicious of Nyamu being with other men during her trip to Mombasa.
The politician claimed that she was in Mombasa working and Samidoh’s allegations are unfounded.
The politician claims that the musician smashed her Iphone 12 Pro Max and also threatened her life. She further narrated that Samidoh has offered to present himself to Kamiti maximum prison in the event she presses charges on him.

Nyamu also claims that the ordeal has traumatised her daughter, who was present as she was being beaten.

The politician has vowed to teach Samidoh a lesson, stating that she has never been physically abused in her life. She vowed to press dosmetic violence charges on him and advised women to walk out of violent relationships.