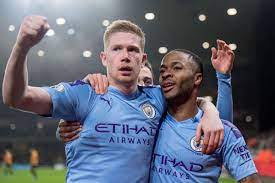 Kevin De Bruyne – famously sold on by Chelsea – went past French international N’Golo Kante on 70 minutes and bent a brilliant, trademark swerving shot inside the far post from 20 yards, his fifth goal against his former club.

It was a game which had been billed as the last chance for Chelsea – and third-placed Liverpool – to keep the defending champions in sight but City were dominant, pinning their visitors back in their own half for long periods and they eventually produced the moment of quality to extend their remarkable winning streak in the league to 12 matches.

“It’s an important victory because we’re playing against a big contender,” City boss Pep Guardiola said afterwards. “When you get three points they can’t get three points and it’s one week less. But in January no one is champion.”