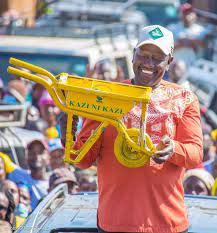 President William Ruto has settled on a yellow presidential standard.

It also has a wheelbarrow sign which is his United Democratic Alliance (UDA) Party’s symbol.

Yellow is the dominant colour of the UDA party.

The shield has the Kenyan flag colours and the two spears are green and black in colour.

Green is also one of UDA’s colours.

The Presidential Standard was unveiled at Kasarani stadium on Tuesday, September 13, 2022 after being sworn in  to take over from his boss Uhuru Kenyatta who has served for two terms.

During his campaign, Ruto portrayed himself as the champion of the poor in the country referring to himself as the ‘Hustler’ hence the choice of a wheelbarrow as his Party’s symbol. 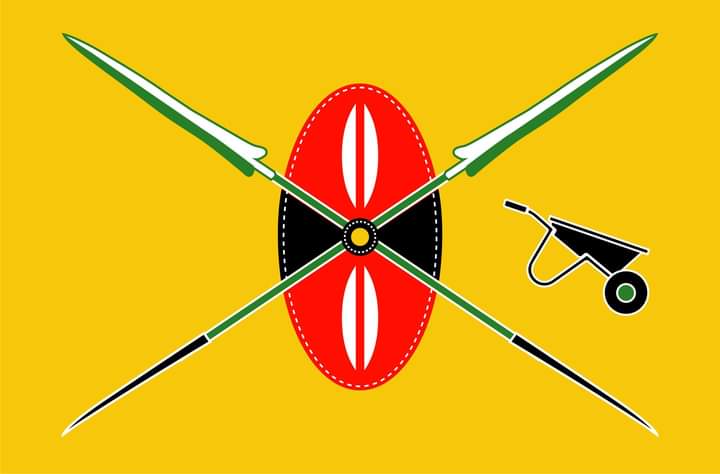 The presidential standard or presidential flag is the flag that is used in many countries as a symbol of the head of state.

It symbolises power and represents the Commander-in-Chief.

It is designed and made to the President-elect’s liking by the Kenya Defence Force.

Details of the other symbols that shall be contained in the flag have not yet been revealed.

However, it shall contain two crossed spears and a shield bearing the colours of the national flag.

These two symbolise unity and readiness to defend the country’s freedom.

Outgoing President Uhuru Kenyatta had a blue one which was an inspiration from the founding President the late Mzee Jomo Kenyatta ( dark blue standard).

Kenya’s third President, the late Mwai Kibaki’s Presidential Standard was white, adorned with a shield in the centre bearing the Kenya national colours between two olive branches which signified peace.

The late Daniel Moi was green, with a red cockerel.