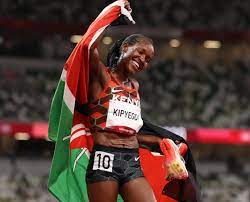 Six Kenyans have been honoured by Kenya’s Head of State President Uhuru Kenyatta for their distinguished and outstanding services rendered to the nation in various capacities and responsibilities.

The six citizens were feted at Nairobi’s Uhuru Gardens during the celebration of this year’s Jamhuri Day, on Sunday, December 12th, 2021.

For the Elder of the Order of the Burning Spear (EBS), Uhuru awarded Eng Gehlot Kishan Singh and Dr Akhwale Willis Simon

While for the Order of the Grand Warrior (OGW) of Kenya, the Head of State awarded Sergeant Salim Mohammed, the 2016 and 2020 Olympic champion and record holder Faith Chepngetich Kipyegon and World half marathon record holder and 42km Olympic winner Peres Chepchirchir.

President Kenyatta award various orders, decorations and medals to Kenyans in various capacities and responsibilities in recognition of outstanding services rendered to the nation

The awards are made by the president upon the advice of a National Honours and Awards Committee in the president’s office.

According to the National Honours Act, those who merit the awards include persons who exhibit exemplary qualities, or achievements of heroism, patriotism or leadership, or those who have made an exemplary contribution to the country in the economic, scientific, academic, sports, journalism, business, security or other fields.