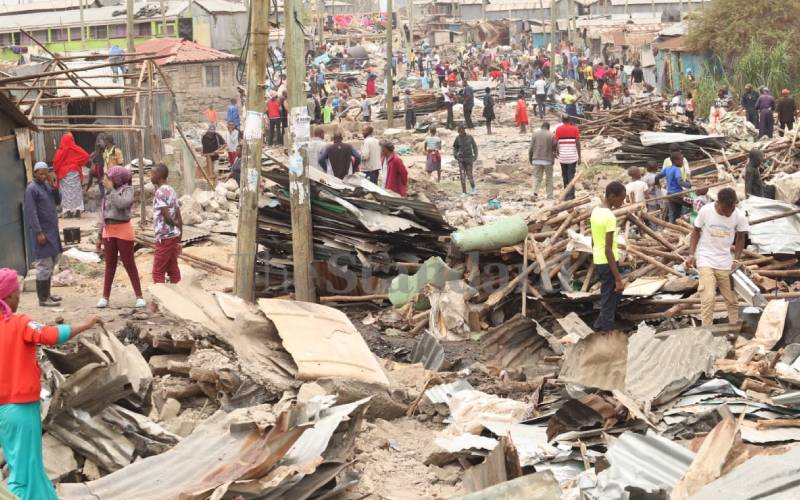 President Uhuru Kenyatta has ordered the cessation of evictions in Mukuru kwa Njenga and the immediate resettlement of victims evicted from the informal settlement on Christmas Day.

Interior Cabinet Secretary Fred Matiang’i, who delivered the President’s order, said the Government would instead expedite negotiations with the private owners of the piece of land at the centre of the dispute.

The CS, who was addressing Mukuru community leaders, said the planned construction of roads and other infrastructure upgrades in the densely populated area will, however, go on as planned but under a negotiated consensus with residents.

“We want everyone who is currently displaced to go back immediately. The instructions are that we immediately cease every activity in Mukuru kwa Njenga until everyone has been resettled,” the CS said.

The CS announced that those who lost their shelters will be settled in the next 30 days, with a special focus on those currently sheltering in tents.

In August 2017, the Nairobi County government declared the Mukuru informal settlement a Special Planning Area (SPA) and approved an Integrated Development Plan on an infrastructural facelift to improve access to water and sanitation services, modern housing and electricity connectivity.

The recarpeting and upgrading of 70 kilometres of roads to cabro and bitumen, construction of a 24-bed Level 3 hospital in Mukuru Kwa Njenga and Mukuru Kayaba, construction of 15,000 housing units under the Kenya Slum Upgrading Programme (KENSUP) and the issuance of 1,329 title deeds were to be undertaken under the program.

The plan was also to extend to the drilling of 10 boreholes and the introduction of a water token system to reduce the cost of water.

But the implementation has been slowed down by controversies of land ownership and settlements.