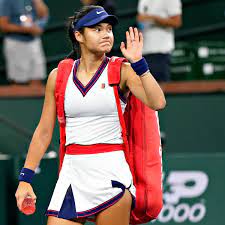 US Open champion Emma Raducanu and world number four Stefanos Tsitsipas have withdrawn from the first WTA tournament of the season in Melbourne, Australia.

Raducanu, the 19 year old Briton recently came out of isolation after contracting Covid-19 in Abu Dhabi before Christmas.

Tsitsipas withdrew from his ATP Cup singles match because of an elbow issue but returned to play in Greece’s opening doubles win.

Raducanu was due to compete in the Melbourne Summer Set, an Australian Open warm-up event set to run from 3-9 January.

“The timing to compete in the first Melbourne event this week is too soon for me, having just returned from isolation,” Raducanu said.

Tsitsipas said his withdrawal from the singles was a “precautionary step” before the Australian Open, which starts on 17 January.

Last season, he was forced to withdraw from the year-ending ATP Finals because of the elbow injury, which later required surgery.

The Greek , 23, was replaced by Aristotelis Thanos to face Poland’s Hubert Hurkacz, who won 6-1 6-2.

“I’m truly relieved that I’m able to feel normal again after years and years of suffering. The concern was kind of something that I expected, but it’s not serious. I’m just trying to protect it,” he said.

“I’ve been using some muscles that I haven’t been able to use before and it takes a little bit of time to get into the rhythm and get to the level I want to.