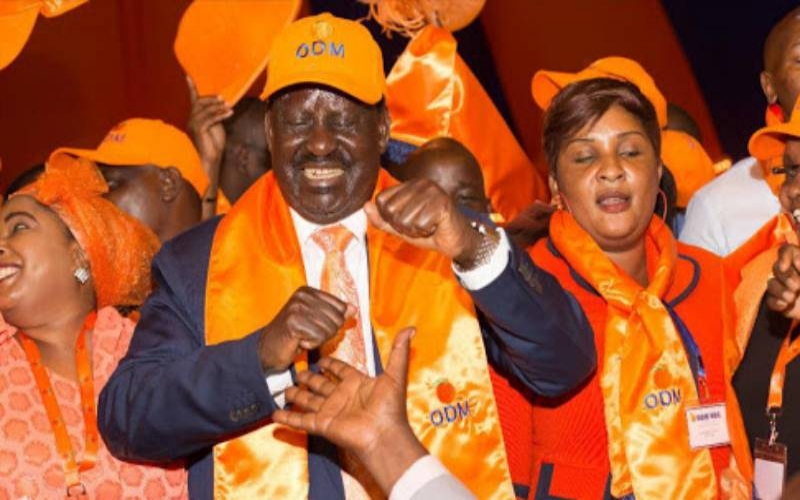 The Infotrak Voice of the People Poll, which gathered views of Kenyans on next year’s presidential elections, pointed out that the contest will be a neck-to-neck two-horse race.

.In the survey conducted by opinion polls agency Infotrak Research and Consulting between September 17 and December 21, placed Raila ahead of the pack with an approval rating of 33%, followed by Ruto at 32%.

The poll showed Ruto’s popularity has been dropping gradually in the last year while that of Raila significantly shot up particularly after the last Azimio La Umoja Convention on 10 December 2021 where the ODM leader declared his candidature.

Raila’s popularity on the other hand was at 13 per cent in December 2020 but shot to 25 per cent in November 2021 and then climbed to 33 per cent after the Azimio event at Moi International Sports Centre Kasarani.

The popularity of former Deputy Prime Minister Musalia Mudavadi of Amani National Congress (ANC) and ex-Vice President Kalonzo Musyoka of Wiper Democratic Party both stood at one per cent each.

However, a huge percentage of Kenyans are still undecided as 21 per cent are yet to make up their minds.

However, Ruto’s UDA party was the most popular at 33 per cent followed by ODM at 32 per cent with Wiper, Kanu, Ford Kenya and others accounting for 35 per cent.

Interestingly, the majority of Kenyans (52 per cent) want the One Kenya Alliance (Oka) to dissolve and either join Raila or Ruto.

Fifty-five per cent of those who want Oka to dissolve want the principals of the alliance (ANC’s Musalia Mudavadi, Wiper’s Kalonzo Musyoka, Ford Kenya’s Moses Wetang’ula and Kanu’s Gideon Moi) to support Raila.

Of the four principals of Oka, 44 per cent of the respondents want Mudavadi to be a running of either Ruto or Raila.

Nineteen per cent want Kalonzo to be running mate while 11 per cent suggested Moi and Wetang’ula (3 per cent ).

Twenty-one per cent did not make any suggestions.

The survey dubbed The Infotrak Voice of the People poll also indicated that 21% of Kenyans are still undecided even as the 2022 polls draw near.

The overall survey had a target sample size of 1,600 respondents who were 18 years and above at the time of the interviews.

The margin of error was plus or minus 2.45 per cent.