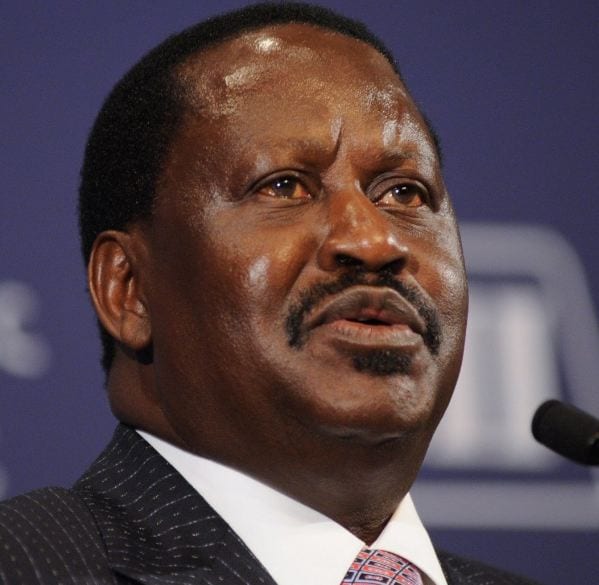 Raila Odinga was born at Maseno Church Missionary Society Hospital, in Maseno, Kisumu District, Nyanza Province on 7 January 1945 to the late Mary Ajuma Odinga and the late Jaramogi Oginga Odinga, the first Vice President of the Republic of Kenya. He went to Kisumu Union Primary School, Maranda Primary, and Maranda High School where he stayed until 1962.

He spent the next two years at the Herder Institut, a part of the philological faculty at the University of Leipzig in East Germany. He received a scholarship that in 1965 sent him to the Technical School, Magdeburg (now a part of Otto-von-Guericke University Magdeburg) in the GDR. In 1970, he graduated with an Msc (Masters of Science) in Mechanical Engineering.

He returned to Kenya in 1970. In 1971 he established the Standard Processing Equipment Construction and Erection Limited (later renamed East African Spectre), a company specialized in the manufacturing of liquid petroleum gas cylinders. In 1974, he was appointed group standards manager of the Kenya Bureau of Standards. In 1978 he was promoted to its Deputy Director, a post he held until his 1982 detention.

Raila Odinga is married to Ida Odinga with whom they have four children; the late Fidel Castro, Rosemary, Raila Junior, and Winnie.

Until his untimely demise, Fidel was a businessman and a solid pillar in his father’s political endeavors. He is survived by his widow, Lwam Bekele, and their son, Allay Raila Odinga.

Rosemary is a passionate educationist serving as the Director of the Raila Odinga Center. This institution is dedicated to improving education standards across the country with its main program operating out of Kibera slums in Nairobi. She has interests in snail farming and is a mother to two beautiful girls, Saphie and Sanayi.

Raila Odinga Jr, his father’s namesake, is a businessman with varied interests from energy to entertainment. He is married to Yvonne Kibukosya.

Winnie serves as the Director of Green Outreach Foundation Africa, an initiative centered around renewable energy to meet the emerging demands of the modern-day world. She is also a professional photographer.

In 1982, Raila Odinga was placed under house arrest for 7 months by then Daniel Moi, the President of Kenya. Raila was later charged with treason following his political agitation for wider democratic space and detained without trial for six years. His mother died in 1984, but it took the prison wardens two months to inform him of her passing, an experience he openly confesses as one of the most traumatizing in his hitherto eventful life.

Released on 6 February 1988, he was rearrested in September 1988 for his involvement with human rights and pro-democracy activists pressing for multi-party democracy in Kenya, which was then a one-party state.

Raila was released on 12 June 1989, only to be incarcerated again on 5 July 1990, together with Kenneth Matiba, and former Nairobi Mayor Charles Rubia. Raila was released on 21 June 1991, and in October, he fled the country for Norway with a hint that the Kenyan government would attempt to assassinate him.

At the time of Raila’s departure to Norway, the Forum for the Restoration of Democracy (FORD), a movement formed to agitate for the return of multi-party democracy to Kenya, was newly formed. In February 1992, Raila returned to join FORD, then led by his father Jaramogi Oginga Odinga. He was elected Vice-Chairman of the General Purposes Committee of the party.

When Jaramogi Oginga Odinga died in January 1994, and Michael Wamalwa Kijana succeeded him as FORD-Kenya chairman, Raila challenged him for the party leadership. The elections were marred by controversy after which Raila resigned from FORD-Kenya to join the National Development Party (NDP). In the 1997 General Election, Raila finished third after President Moi, the incumbent, and Democratic Party candidate Mwai Kibaki. He retained his position as the Langata MP.

After the election, Raila supported the Moi government and led a merger between his party, NDP, and Moi’s KANU party. He served in Moi’s Cabinet as Energy Minister from June 2001 to 2002, during Moi’s final term.

In the subsequent KANU elections held later that year, he was elected the party’s secretary-general (replacing the late J. J. Kamotho). In 2002, the then President, Daniel Arap Moi, pulled a surprise by endorsing Uhuru Kenyatta – a son of Kenya’s first president Jomo Kenyatta to be his successor. Moi publicly asked Raila and others to support Uhuru as well.

Raila and other KANU members, including his current Deputy in the CORD Coalition Kalonzo Musyoka, the late George Saitoti, and the late Joseph Kamotho, opposed this step arguing that the then 38-year-old Uhuru, was politically inexperienced and lacked the leadership qualities needed to govern. The Rainbow Movement went on to join the Liberal Democratic Party (LDP), which later teamed up with Mwai Kibaki’s National Alliance Party of Kenya (NAK), a coalition of several other parties, to form the National Rainbow Coalition (NARC) that eventually defeated Moi’s protege, Uhuru Kenyatta.

Raila became the second father of multi- party democracy in Kenya after Kenneth Matiba. It was at this point that he earned his nickname; to his political followers, he is also referred as “Agwambo”, the meaning of which is Mysterious One, or “Jakom”, meaning Chairman.

President Kibaki failed to honor a pre-election agreement regarding political equity among the stakeholders in NARC and a pledge made to the Kenyan people to review the Kenyan Constitution within a hundred days of the election.

The perceived “betrayal” led to an open rebellion and a split within the cabinet, which culminated in disagreements over a proposed new constitution for the country. The government-backed constitutional committee submitted a draft constitution that was perceived to consolidate powers of the presidency and weaken regional governments as had been provided for under an earlier draft before the 2002 Elections. Raila opposed this, and when the document was put to a referendum on 21 November 2005, the government lost by a 57% to 43% margin.

Following this, President Kibaki sacked the entire cabinet on November 23, 2005. When it was formed two weeks later, Raila and the entire LDP group were left out. This led to the formation of the Orange Democratic Movement (ODM) – an Orange was the symbol for the “no” vote in the constitutional referendum.

In August 2007, the Orange Democratic Movement-Kenya split in two, with Odinga becoming head of the Orange Democratic Movement (ODM) while the other faction, the ODM-K, was headed by Kalonzo Musyoka. On 1 September 2007, the ODM elected Odinga as its presidential candidate in a National Delegates Conference held at the Moi International Sports Centre in Nairobi. Odinga received 2,656 votes; the only other candidates receiving significant numbers of votes were Musalia Mudavadi with 391 and William Ruto with 368. Earlier, Najib Balala had withdrawn his candidature and endorsed Raila. The defeated candidates expressed their support for Odinga afterward, and Mudavadi was named as his running mate.

Odinga launched his presidential campaign in Uhuru Park in Nairobi on 6 October 2007.

Following the presidential election held on 27 December, the Electoral Commission in declared Kibaki the winner on 30 December 2007, placing him ahead of Odinga by about 232,000 votes. Raila and his ODM leaders rallied against the decision with James Orengo and Prof. ANyang’ Nyong’o calling for mass action. Later violence broke out in the country after widespread incidents of police brutality.

Following two months of unrest, a peace deal between Odinga and Kibaki, which provided for power-sharing and the creation of the post of Prime Minister, was signed in February 2008; it was brokered by former UN Secretary-General Kofi Annan. Odinga was sworn in as Prime Minister, along with the power-sharing Cabinet, on 17 April 2008. The post of Prime Minister was last held by Jomo Kenyatta between 1963 and 1964 following independence. Odinga is thus the second person in Kenya’s history to hold the position.

Raila Odinga’s party, Orange Democratic Movement (ODM) joined Kalonzo Musyoka’s Wiper Party and Moses Wetangula’s Ford Kenya (FK) in a CORD coalition (Coalition for Reforms and Democracy) for the presidential race with Raila as the presidential candidate and Kalonzo as his running mate.

However, Raila Odinga in a press conference shortly after the results were announced noted that the election had been marred by massive failures by the BVR kits, EVID (electronic voter identification or “Pollbooks”), RTS (results transmission system or “tallying system”) and the RPS (results presentation or “transmissions system”). He stated that the manual tallying was suspect leaving him no choice but to contest the result in Kenya’s highest court, The Supreme Court.

Mindful of bringing the challenge, Raila Odinga and his lawyers George Oraro, Mutula Kilonzo, and James Orengo, secretly instructed Raj Pal Senna, a Management Consultant from Barcelona to carry out a forensic investigation of the technology used in the Kenyan General Election 2013, during which the IEBC made claims on TV and media that there were “technological challenges”, that “servers overloaded” and that “database crashed”.

Raj Pal Senna included in this work a forensic examination of the evidence of IEBC and Uhuru Kenyatta in relation to the technology deployed during the Kenyan Presidential Elections. Raila Odinga and his lawyers then took appropriate legal steps to verify the findings of Raj Pal Senna by consulting authorities in the USA and the UK. The findings of the Raj Pal Senna were then documented in his witness statement for Raila Odinga, and became to be known as “Witness Statement RO6”

Kenya’s chief justice Dr. Willy Mutunga announced on Monday, 11 March that the Supreme Court was fully formed and ready to deliver its judgment within 14 days as stipulated by the Constitution of Kenya.

During the Petition hearing, Chief Justice Willy Mutung made a finding rejecting the second affidavit of Raila Odinga which comprised 900 pages, on the basis that it amounted to “new evidence” which is not permitted under the Constitution. Subsequently, The Supreme Court issued a ruling dismissing the petition on 30 March 2013. The Supreme Court while declaring Uhuru the next President also declared that the IEBC should not have included the invalid/spoilt votes in the calculation of the final figures and percentages. Chief Justice Willy Mutunga also directed that the EACC (Ethics and Anti Corruption Commission) and the DPP (Director of Public Prosecutions) carry out a criminal investigation of the IEBC in relation to the BVR, EVID, RTS, and RPS.

Raila Odinga now serves the Republic of Kenya as the Leader of the Official Opposition keen to ensure the full and proper implementation of the Constitution of Kenya 2010, the promotion of democratic ideals, and the protection of equity & justice in our society.